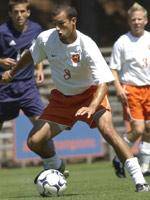 Clemson And Winthrop Play To A 1-1 Tie

CLEMSON, SC- Clemson and Winthrop played to a 1-1 tie in a men’s intercollegiate soccer match at Clemson, SC Wednesday night.

Clemson is now 2-2-1 on the year, while Winthrop remains unbeaten with a 3-0-1 mark this season. The Tigers are ranked 24th in the latest Soccer America poll.

Clemson scored first at the 21:54 mark as freshman Olatomiwa Ogunsola scored his first career goal with an assist by Paul Souders. Souders crossed the ball from the left to an open Ogusola who sent a shot from nine yards out into the net.

Winthrop evened the score at the 58:07 point into the match. Kevin Green sent a pass from the left into the center of the penalty box. Dee Vydra faked left and went right and sent a 12 yard shot into the goal near the left post. It was Vydra’s second goal of the season.

The Tigers will play host to Duke on Sunday, September 14, at 2:00 p.m. in an Atlantic Coast Conference match.

“We created enough chances but could not finish,” said Clemson Head Coach Trevor Adair. “I can’t fault the effort of our team. I was disappointed when Olatomiwa Ogusola was hurt and had to leave the game. He created chances for us tonight. I thought Grant Kevins did a great job and gave a great effort.”