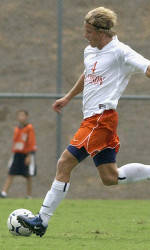 Clemson and Furman play to a 2-2 Tie

GREENVILLE, SC-Clemson and Furman played to a 2-2 overtime tie in a men’s intercollegiate soccer match at Greenville, SC Wednesday night. Olatomiwa Ogunsola tied the score for Clemson with 2:50 left in regulation.

Furman scored first at the 33:53 mark. Noah Grams sent a pass to Richard Jata. Jata sent a 16-yard diagonal shot from the left to the right post for his fourth goal of the season.

Clemson scored at the 48:58 mark as Justin Moore served the ball in the box from the right side. Steven Rhyne headed the ball in from eight yards out for his 11th goal of the year.

Luke Barbour put the Paladins ahead 2-1 with 16:07 left to go in regulation. Richard Jata sent a corner kick into the box at the far post. Barbour headed the ball in from six yards out for his second goal of the season.

Clemson tied the score 2-2 with 2:50 left in regulation. Havird Usry served the ball in the box from 35 yards out to Ogunsola. Ogunsola headed the ball into the net for his third goal of the season.

“I thought we showed a lot of heart and character coming back in this game,” said Clemson Head Coch Justin Moore played superbly. I am disappointed we didn’t win. We had more chances and we controlled the play of the gam. We continue our struggle to score. I am proud of the way our guys fought, and we had most of the chances.”

Clemson will play host to North Carolina on Sunday afternoon at 2:00 p.m. in the Tigers’ next action.