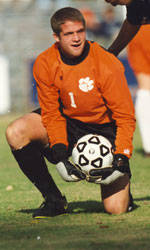 The Tigers are now 10-2-3 overall, and Davidson falls to 8-4-4 this season. Clemson is ranked sixth by Soccer America and eighth by the NSCAA. The Tigers are ranked seventh by Soccertimes.com.

Davidson scored first at the 81:18 mark as Preston Davis scored his second goal of the year with an assist by David Sartorio. Davis scored off a crossing pass.

Clemson evened the score with 4:23 left in regulation. Dwayne Jones scored his third goal of the year. He scored the unassisted goal from near the corner of the box.

The Tigers will play host to North Carolina on Sunday, November 3, at 2:00 p.m. in Clemson’s next action.