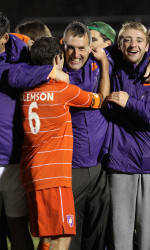 2011 Performance Indicates Clemson Soccer is on the Right Track

CLEMSON, SC – The Clemson Men’s Soccer program proved that it is once again a force to be reckoned with in college soccer. Despite not receiving an invitation to this year’s NCAA tournament, the Tigers put together a strong résumé as they battled 12 NCAA tournament-bound teams on the pitch, including signature wins against fourth-seeded Maryland, fifth-seeded Boston College and arch-rival South Carolina.

Clemson concluded the season undefeated in its final six contests, and, despite entering the final match ranked 37th in the RPI, the Tigers finished the season ranked 42nd in the RPI following a 0-0 tie at #23 Duke.

Clemson’s reemergence onto the national scene is most apparent when looking at its finish in the ACC standings, by far the nation’s strongest conference in college soccer:

Head Coach Mike Noonan had the following thoughts about not being selected for the tournament:

“Obviously, we’re disappointed not to be in the NCAA tournament, as we proved over the last six games that we can play with anyone. I’m particularly disappointed for our lone senior, Keegan Priest. However, this really young team can use it as motivation for the coming seasons.”

Clemson’s national championships in 1984 and 1987 serve as the barometer for this iconic program. After posting its best overall record in the last five seasons, its most ACC wins in the last 10 seasons, and with all but one letterman returning in 2012, Clemson Soccer is back and poised to move further down the road toward its third national championship in the near future.