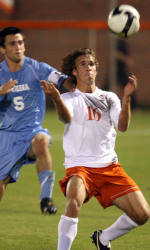 With the win, Wake Forest improves to 3-0-1 overall, while Clemson falls to 0-3-1 this season. This was the first Atlantic Coast Conference match of the season for both teams. Wake Forest is ranked second in the lastest NSCAA poll.

Wake Forest scored first in the sixth minute. Austin da Luz came down the left center of the field and passed the ball to Ike Opara. Opara sent a diagonal header into the left corner of the goal over Clemson’s goalkeeper Joseph Bendik for his first goal of the season.

The Demon Deacons scored in the 60th minute. Da Luz sent a diagonal pass from the left corner of the box. Sean Randolph touched the pass into the goal from close range for his second goal of the season.

With 25:33 left to go in the match, Clemson’s Nick Burton sent a shot from 10 yards out that hit the post. Wake Forest goalkeeper Akira Fitzgerald saved the ball before another shot was taken.

Wake Forest scored again with 7:05 left to go in the match. Zack Schilawski sent a pass to Sean Randolph creating a one-on-one situation with Clemson’s goalkeeper, Joseph Bendick. Sean Randolph took a shot, and it was saved by Bendick. The rebound came back to Randolph and he sent another shot that went into the goal. Zack Schilawski was credited with the assist.

Clemson scored with 1:58 left to go in the match. Nathan Thornton took a clearance from the Wake Forest Defense and sent a shot into the goal near the left post from 18 yards out. It was Thornton’s second goal of the season.

“It was a difficult loss,” said Clemson Head Coach Phil Hindson. Again, we gave a goal away so early in the game and were down 1-1. We had a chance to tie but we couldn’t convert. We created opportunities but we didn’t capitalize. Our final ball is not what it should be.

“Wake Forest is a great team with a lot of good players. In this match, we made poor judgments and made too many mental mistakes. The effort is there, but the final ball and the final decisions are not what they should be. We make it too easy for our opponents. And a good team like Wake Forest is going to punish you. We are going to continue to work hard and we are going to have to make adjustments.²