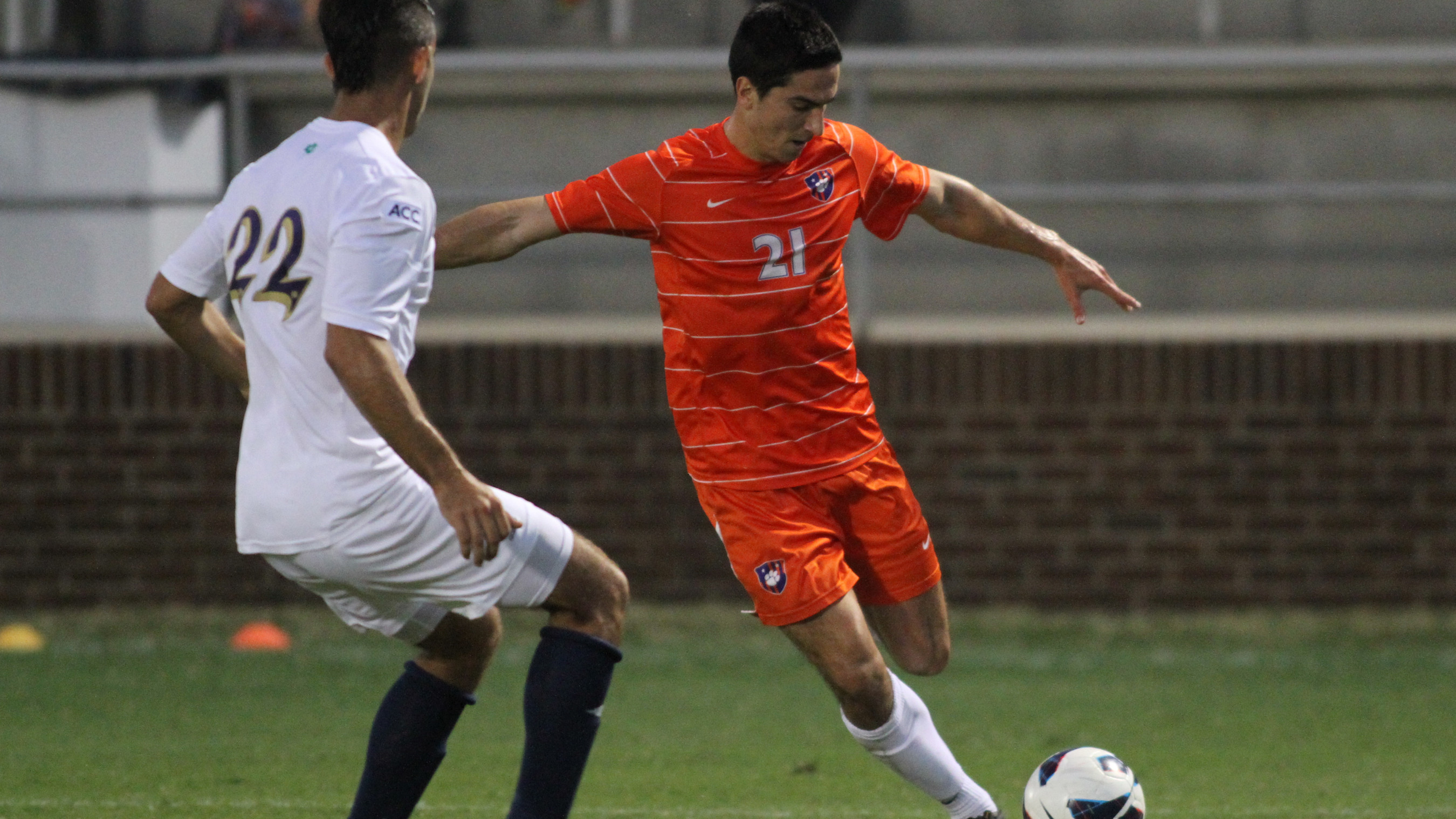 CLEMSON, SC – Harrison Shipp scored two goals in leading second-ranked Notre Dame to a 2-1 overtime victory over #13 Clemson in a men’s Atlantic Coast Conference soccer match at Clemson, SC Saturday night. With the victory, Notre Dame improves to 6-0-3 overall and 3-0-2 in the ACC.  Clemson falls to 7-2-1 overall and 2-2-1 in league play. Notre Dame scored midway in the first half in the 21st minute.  Harrison Shipp stole the ball on the left flank just outside the box.  Clemson’s goalkeeper Andrew Tarbell came out and slid toward Shipp in an attempt to make a tackle and missed.  Shipp went around Tarbell to an open goal and fired a shot to the right corner of the netting to give the Irish a 1-0 lead. The Irish would maintain their lead despite several chances of scoring by Clemson.  The Tigers outshot Notre Dame 15-7 in the game including a 9-2 edge in the second half.  The Tigers hit the left post with just under 16 minutes to play as Ara Amirkhanian hit the left post from 16 yards out on a shot that went rebounded out of danger with no follow up.  With almost four minutes to play, Jack Metcalf took a shot that was blocked and Thales Moreno took another shot that went just outside of the mark. However, Amirkhanian scored in the 88th minute of play.  With 2:58 remaining Clemson’s Thomas McNamara sent a low corner kick to the box from the right side.  Amirkhanian one-stepped a shot that curved and went into the netting for his fifth goal of the season.  It was McNamara’s fifth assist this year. In the overtime period Shipp gained possession of a loose ball at the top of the box.  He turned and sent an 18-yard shot into the right wall of the netting for his second goal of the night and his team-leading fifth goal of the season. “Soccer can be a cruel game,” said Clemson Head Coach Mike Noonan.  “We worked hard to score the equalizer and they scored early in the first overtime period.  I think when they scored their first goal, that it deflated us.  We made some adjustments at halftime, and you saw the result of those changes in the second half.  There is no doubt that we made some mistakes that cost us the two goals.  You cannot make mistakes like we did against the number-two team in the country and expect to win.  A team like Notre Dame will make you pay. “We had several chances in the match but could not take advantage of our opportunities.    Notre Dame is very experienced and they did a good job on defense.  I thought McNamara played well for us.  I thought we kept the pressure on especially in the second half.  We also again proved that we can play with anyone in the United States, but we don’t want moral victories.  We want to figure out how to beat the best teams in the country.Scoring Summary Notre Dame – Harrison Shipp (Unassisted) 20:08 Clemson – Ara Amirkhanian (Thomas McNamara) 87:02 Notre Dame – Harrison Shipp (Unassisted) 91:55 Shots:  Clemson 15, Notre Dame 7 Corner Kicks:  Clemson 4, Notre Dame 3 Saves:  Andrew Tarbell (CU) 1, Patrick Wall (ND) 2 Fouls:  Clemson 13, Notre Dame 11 Attendance:  3,680