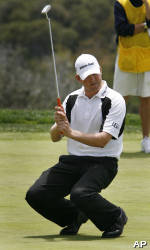 Trahan Makes Cut at US Open with Second Round 69

Clemson, SC — Former Clemson All-American and National player of the Year D.J. Trahan made his first cut in a professional major on Friday when he fired a two-under-par 69 at the United States Open at Torrey Pines Golf Club in San Diego, CA. Trahan stood in fifth place at one-under par 141 for the 36 holes when he finished at 3:45 PM.

Trahan’s 69 was the lowest score by a former Clemson golfer at the US Open since 2003 when Jonathan Byrd shot a four-under-par 66 in the second round at Olympia Fields, IL.

Trahan had failed to make the cut in each of his first four majors, including the Masters earlier this year. But, he will be in the thick of the US Open race when the third round begins on Saturday. His round on Friday included three birdies and just one bogey. He has now made just one bogey in his last 29 holes.

Two more rounds of consistent golf and Trahan will have a chance to establish the top finish by a golfer with ties to Clemson at the US Open.

Kyle Stanley, who just finished his sophomore year at Clemson, was in 19th place at the start of his round on Friday. He had a late tee time and his status for the 36-hole cut won’t be known until 9:30 PM eastern time. Clemson has not had two former players to make the cut at the US Open since 1989 when Clarence Rose and Dillard Pruitt both made the cut at Rochester, NY.

Trahan is one of three golfers with ties to Clemson who are competing in the United States Open. Jonathan Byrd, a teammate of Trahan at Clemson in 2000, shot a 77 on Friday and stands at 10 over par after two rounds and missed the cut. Byrd did make a 175-yard shot for an eagle on the par four seventh hole and birdied the ninth hole, but his 10-over par score is 11 shots off of Trahan and thus he can not finish within the 10 shots of the lead.

Trahan played for the Tigers from 1999-03. He was a first-team All-American in 2002 and 2003. He led the Tigers to the program’s only national championship in 2003. He won the Jack Nicklaus Award as the national player of the year as a junior in 2002 when he had a Clemson record 70.33 stroke average. Trahan and Stanley rank first and second in career stroke average in Clemson history.

Trahan has hit just 20 of 36 greens in regulation, and hit the fairway on just 17 of 28 drives over the first two rounds. But, the key has been putting as he has averaged just 1.53 putts per hole and had just 24 putts for his 18 holes on Friday.

“I had a straight putt for birdie on the ninth hole from about 10 feet,” said Trahan. “I had a big save on 14 and that allowed me to keep some momentum. I drove it into the rough, and had to chip out. My third shot was aggressive and got to 10 feet from the pin. I then made the putt for par.” Trahan then made a 20 foot birdie putt on the 16th hole to get to two under for the round. He had another chance at a birdie on 18, but missed a five foot putt.

Trahan commented to NBC’s Jimmy Roberts after his round on his improvement since his last appearance at the US Open two years ago when he missed the cut. “The difference is that I am getting more confident and gaining maturity. It takes a while, because you are out here playing against the best players in the world each week. It takes the first couple of years to figure it out. But, I have been working hard to improve all areas of my game.”