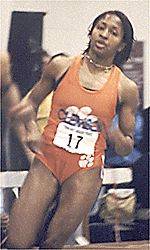 Sophomore Ryan Lewis won the pole vault with a height of 16-4 3/4. He entered the meet with the second best clearance behind North Carolina’s Brent Callaway. Callaway did not get over the bar Friday night. Duke’s Seth Benson also cleared 16-4 3/4 quarters, but since Lewis cleared first, he was awarded the 10 points.

Sophomore Kai Maull was third in the long jump to earn six points for the Tigers. He leaped 24-3 1/2 just seven inches behind Florida State’s Joe Allen who won the event. Sophomore Keith Rzewuski added four points with a fifth-place finish in the shot put. He heaved the shot 50-8 3/4.

Clemson scored 20 points in the high jump, which was won by freshman Malcolm Reynolds. He cleared 6-10 3/4 for the victory. Sophomores Mike Mirabito and Doug Ameigh tied with Florida State’s Christian Bland for third place, splitting 15 points between the three. Freshman Jason Meany added a third-place finish in the 10,000m.

The Tigers also set themselves up for a major run at the championship for Saturday’s finals by qualifying several athletes in the sprints.

Shawn Crawford continued to be the story for Clemson in the preliminary events. In the 200m, he ran 20.29 to improve his automatic qualification for the NCAA championships. He entered the meet with a season-best 20.33, which was the third-fastest time in the NCAA entering the meet. His time in Friday’s preliminaries is the second-fastest mark in the nation this year behind Auburn’s Coby Miller. Crawford will be joined in the finals by senior Charles Allen, who qualified fifth, and freshman Jacey Harper, who qualified eighth.

Crawford was also the top qualifier in the 100 running a 10.33 to win his heat. Allen, Harper and Anthony Moorman also advanced to Saturday’s final in the 100m, meaning four of the eight in the final will represent Clemson.

Four Tigers also advanced to the final of the 110m high hurdles. Sophomore Todd Matthews was the top qualifier for Clemson followed by junior Sultan Tucker. Each won their heat in respective times of 13.34 and 13.86. Allen and Ian Potter also advanced.

In the 400m hurdles, sophomore Fred Sharpe won his heat in a time of 51.66 and qualified for the second-best lane assignment for the finals.

Sophomore Ato Modibo won his heat in the 400m in 48.13, the third-best time of the day. Sophomore Mike Connelly won his heat in the 800m. He was the second qualifier for Saturday’s final with a time of 1:51.48. In the 1500m, sophomore Ryan Demers was second in the second heat with a time of 3:50.48. It was the third fastest qualification of the day.

Junior Andy Geisler and sophomore Mark Jellison are in good position after five events of the decathlon. Geisler is third with 3,794 points and Jellison is fourth with 3,729. Geisler won the shot put and Jellison won the long jump.

Costa cleared 12-3 1/2 in her second-place effort in the pole vault that earned the Tigers eight points. The clearance was the same height as the winner, Duke’s Jillian Schwartz. Costa cleared on a later attempt than Schwartz giving the Blue Devil the victory, but because the mark is the same, the two vaulters share the distinction as ACC championship record holder.

Senior Beth Ahern was eighth in the 3,000m to score Clemson’s only other point during the first day of competition. Clemson is in eighth place in the team race. North Carolina is the day one leader with 54 points, followed by Virginia, with 32 points, and Florida State with 22 points.

Junior LaShonda Cutchin won her heat in the 400m in a time of 54.76. It was the third best qualifying time in the preliminaries. Freshman Marcia Smith also qualified for the finals, having finished fourth in her heat with a time of 55.16.

Costa is 10th through the first four events of the heptathlon. She has scored 2,478 points. She entered the meet with the second-best point total in the ACC behind Maryland’s Amber Stanley. Stanley is second after the first day. Florida State’s Chinette Johnson leads the field with 3,215 points.