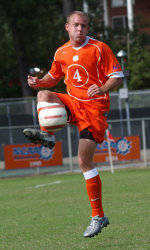 NEW YORK (Wednesday, November 30, 2005) – Major League Soccer today announced the initial list of 54 college seniors from 36 Division I schools who have been selected to participate in the 2006 adidas MLS Player Combine. The annual player combine will be held for the third consecutive year at The Home Depot Center in Carson, California from January 12-15, 2006.

Among those players invited was Clemson’s Justin Moore. The senior defender has started 20 matches for the Tigers this season and has seven assists. He has started in 72 matches during his Clemson career. He has four career goals and 16 career assists at Clemson.

The coaching staffs and general managers from all 12 MLS teams will be in attendance to scout talent at the 2006 adidas MLS Player Combine, which concludes five days before the 2006 MLS SuperDraft. The 2006 MLS SuperDraft will be held on Friday, January 20, 2006 in Philadelphia, Pa. in conjunction with the National Soccer Coaches Association of America (NSCAA) Convention at the Pennsylvania Convention Center. Of the 48 players selected in the four rounds of the 2005 MLS SuperDraft, 39 had participated in the 2005 adidas Player Combine, including New England Revolution draftee Michael Parkhurst, a Generation adidas player and Major League Soccer’s 2005 Gatorade Rookie of the Year .

The initial list of players for the 2006 adidas Player Combine was determined by a select panel of Division I college coaches representing all conferences, who nominated and voted for players in conjunction with MLS coaches. Youth players from the Generation adidas program will join additional collegiate players from NCAA Division II and III schools, NAIA schools and Division I alternates to finalize the 2006 adidas Player Combine. These players will be announced in the near future.

The 2006 adidas MLS Player Combine will separate all players into four teams and feature doubleheaders at The Home Depot Center on the mornings of January 13, 14 and 15. Players will arrive on January 12 and participate in organizational training sessions that same afternoon at The Home Depot Center. The Torrance Marriott will serve as the official headquarters of the adidas MLS Player Combine and the host hotel for players and coaching staffs.

Following are the names of the 54 players selected, broken down by position: