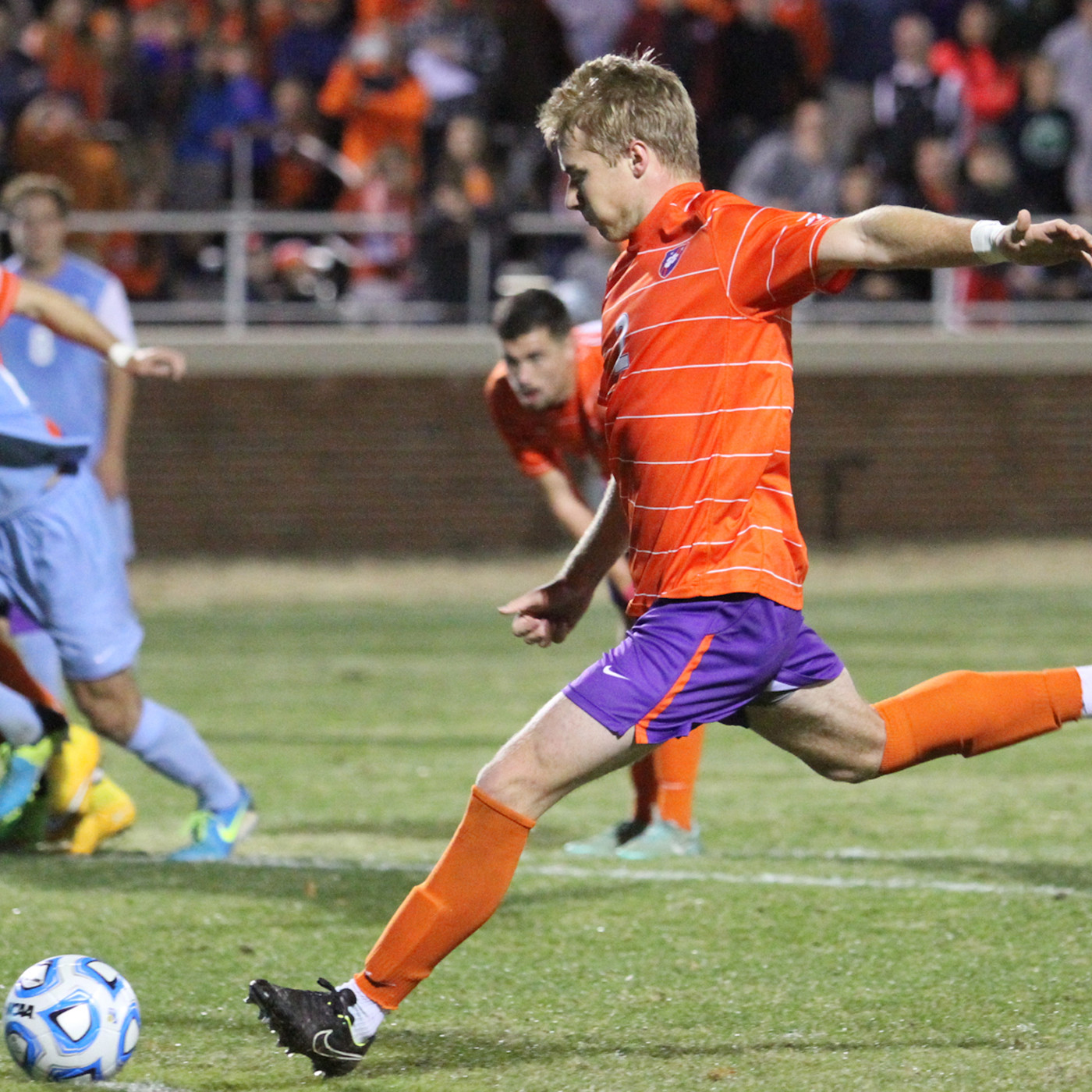 Clemson’s NCAA Run Ends in Round of 16

CLEMSON, S.C. – The Clemson men’s soccer team saw its season come to a close as it fell to North Carolina by a score of 2-1 in the Round of 16 of the NCAA Tournament on Sunday night at Historic Riggs Field. The loss was Clemson’s first since Oct. 7, as the Tigers were on a 10-match unbeaten streak coming into tonight’s contest. Clemson finishes the season with a record of 12-7-3.

The Tar Heels put the game’s first goal on the board in the 13th minute off a corner kick. Omar Holness sent the kick into the box and Robert Lovejoy headed it from inside the box into the upper left side of the net.

Clemson evened the score just over 10 minutes later when sophomore Alex Happi was taken down in the box by a North Carolina defender, resulting in a penalty kick for the Tigers. Junior Kyle Fisher handled the kick, which he sent on the ground toward the right side of the net. Tar Heel keeper Brendan Moore attempted to save the shot with his legs, but the ball bounced off his left leg into the top of the net for the score.

The game was tied at halftime, and remained even until the 71st minute, when Lovejoy netted his second goal of the day. After making a nice move past his defender, Lovejoy launched a low shot into the bottom right corner of the net out of the reach of diving Tiger keeper Andrew Tarbell.

“I have to give credit to North Carolina,” Clemson coach Mike Noonan said. “They are a good team and they are on a good run. They took their chances well and their goalkeeper played well. They did what they needed to do in both boxes.”

“I thought we played exceptionally well,” Noonan added. “I’m very proud of these guys. We prepared well, we played well and we lost, which is a cruel part of this game.”

Tonight was the second match of the NCAA Tournament for Clemson. The Tigers’ first match, a 2-1 victory over Coastal Carolina on Monday, Nov. 24, was the program’s first NCAA Tournament win since 2006 and Clemson’s first under Noonan. Clemson also won the program’s 14th ACC Championship on Sunday, Nov. 16 with a 2-1 overtime win over Louisville.

“Tonight was a disappointment, but that will fade,” Noonan said. “This senior class – who they are and what they have accomplished – is amazing. Four years ago, this was a broken program, and they have re-established the rich tradition of Clemson soccer. They had the courage to take the risk to come here and they believed, and I can’t thank them enough. The values and character of this team makes for a very bright future for the guys on the team and for the program.”