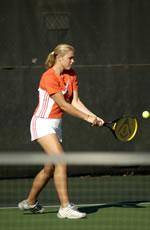 RALEIGH, N.C. – The ninth-ranked Clemson women’s tennis team defeated 14th-ranked North Carolina by a score of 4-1 in the semifinal round of the 2004 ACC Women’s Tennis Championships in Raleigh, NC on Saturday. The top-seeded Tigers improve to 21-3 on the season, and advance to Sunday’s championship match to face fifth-ranked Duke, the tournament’s second-seeded team.

The Tigers earned the team doubles point with wins at flight one and three doubles. Clemson’s Daniela Alvarez and Maria Brito defeated the Tar Heels’ Kendall Cline and Aniela Mojzis by a score of 8-6 at the number one doubles position. The Tigers’ Richele LeSaldo and Karen Rombouts won an 8-5 decision over Sara Anundsen and Jenna Long at flight three.

In singles action, Clemson’s Alix Lacelarie defeated Caitlin Collins of North Carolina by a score of 1-6, 6-0, 6-4 at number three singles. The Tigers’ Brito won a 5-7, 6-1, 6-2 decision over the Tar Heels’ Cline at flight four. At five singles, Clemson’s Ioana Paun dropped her match to North Carolina’s Anundsen by a score of 6-1, 6-4. Rombouts of Clemson was victorious over her Tar Heel opponent, Long, by a score of 6-0, 7-6(3) at the number six singles position.

Clemson, currently ranked ninth as a team by the ITA, will face fifth-ranked Duke in the ACC Championship match on Sunday. During the conference regular season, the Tigers defeated the Blue Devils by a score of 5-2 in Durham. Sunday’s championship match will be held at the Millbrook Exchange Tennis Center in Raleigh, NC and is scheduled to begin at 11:00 a.m.