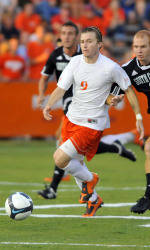 Clemson has a 3-5-2 record overall this season. In the last three matches, Clemson has defeated St. Louis and Gardner-Webb and tied 11th-ranked Boston College 1-1.

The Tigers are led in scoring by Riley Sumpter, Tommy Drake. All three players have six points this season. In goal, freshman Cody Mizell has a 0.94 goal allowed average. He also has made 40 saves this season.

Elon has a 4-3-4 record overall this season. Chris Thomas leads the Phoenix with five goals for 10 points. Gave Latigue has four goals and one assist for nine points.

This will be the fifth meeting between Clemson and Elon on the soccer field. Clemson leads the series 2-1-1. The two schools first met in men’s soccer in 1998.