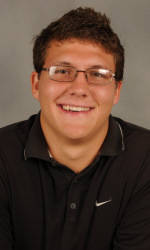 There were bright spots during the 2008 Clemson men’s soccer season. The Tigers earned victories over the two teams that played for the national title, runner-up North Carolina and eventual champion Maryland. Clemson defeated a then #4-ranked Maryland squad 5-3 at Riggs Field as well as the then #7-ranked Tar Heels 3-2 in overtime at Riggs Field.

Junior goalkeeper Joseph Bendik had a lot to do with those two victories, something he has done during his career at Clemson. At season’s end, he was named Second-Team All-ACC as well as NSCAA/Adidas Third-Team All-South. He not only led the ACC in saves per match but total saves as well.

Bendik started all 18 matches and made 93 saves, an average of just over five per match. It was the second straight year Bendik finished 26th in the nation in saves per match. He also was third in the ACC in save percentage (.767), which means he stopped more than 75 percent of the shots he faced throughout the season.

Starting in goal for the Tigers has been a long-time dream for Bendik. “I came to Clemson’s soccer camp when I was 11, so I have thought about playing here for some time,” stated Bendik.

Five years later he committed to the Clemson program that was coming off an NCAA Final Four appearance.

His decision of whether or not to attend Clemson was not just about soccer. “I wanted to play for an elite program, but I also wanted to go to a school that was close enough to home so that my family could come watch me play.”

One other factor also played a large role in Bendik’s choice to attend Clemson. Bendik’s sister Megan graduated from Clemson earlier this year and was one of the top rowers on the 2009 team that finished 12th in the nation. Now, Joe wants to become the second member of his family to play on a top-15 program.

Bendik arrived at Clemson in the fall of 2006 after a stellar high school and club soccer career that saw him chosen as a member of the U-18 national team. He was also named an NSCAA High School All-American and attended the Adidas ESP (Elite Soccer Program) in Hartford, CT.

When Bendik arrived in Clemson, he knew that he might not see much playing time, because Phil Marfuggi returned in goal after helping the Tigers to the Final Four in 2005. The 2006 season saw the true-freshman Bendik appear in six matches, including four starts. Bendik was 3-1 in those matches, including wins over Virginia and North Carolina. After the 2006 season, Bendik played on the United States U-18 national team in a match against Brazil in December.

With Marfuggi’s graduation, the 2007 season included a vast increase in playing time for Bendik. He started all 19 matches that he appeared in for a total of 1,745 minutes and finished with 93 saves. He was 26th nationally in saves per match (4.9). Bendik was named to the Virginia Tech All-Tournament team that season as well.

Between the 2007 and 2008 seasons, Bendik played for Cobb FC, the same club team that he played for during high school. That team won the State Cup Championship and was a regional finalist during the summer of 2008.

Clemson finished with a 7-9-2 record in the fall of 2008, but the aforementioned victories over North Carolina and Maryland demonstrate the potential for the program heading forward. Bendik will be one of the senior leaders in 2009.

When Bendik was asked about the goals of the team for 2009, he replied, “I think the past two years for us have been a big test. The coaches have implemented some really hard fitness that we have all adapted to well. We believe that it’s time for us to return to the NCAA Tournament.”

The only personal goal that Bendik said he has for the 2009 season is to be named First-Team All-ACC. After earning second-team honors last year, that is certainly attainable. He knows that to achieve this goal, he will need another stellar season, and playing behind a veteran defense makes Bendik feel comfortable during matches.

“Greg Eckhardt and David Newton along with myself have really grown as players, and together we have made a solid defensive block. We have grown to know each others’ tendencies, which makes it easier to play together.”

As Bendik enters his senior season, he will look back upon his time here with the Tigers with pride and hopefully move forward into a future that includes professional soccer.

“I will never forget my time here,” Bendik said. “Beating Maryland and North Carolina at Riggs Field were certainly memorable matches last year. The home crowds were great. We want to have more of those moments in 2009.”

Bendik hopes to leave his legacy as a soccer player at Clemson after this season, but he also wants young soccer players to know that there is no finer place to play college soccer than Clemson.

“Clemson has the best facilities in the country,” he exclaimed. “Our practice field is just as nice as Riggs Field, and the weightroom is a huge help in boosting players to their potential. Coaches, advisors, and your teammates are like family here, and the team chemistry is a big part of the experience. You can feel it grow over your four years.”

Heath Bradley, a senior from Piedmont, SC, is a student assistant in the Clemson Sports Information Office.