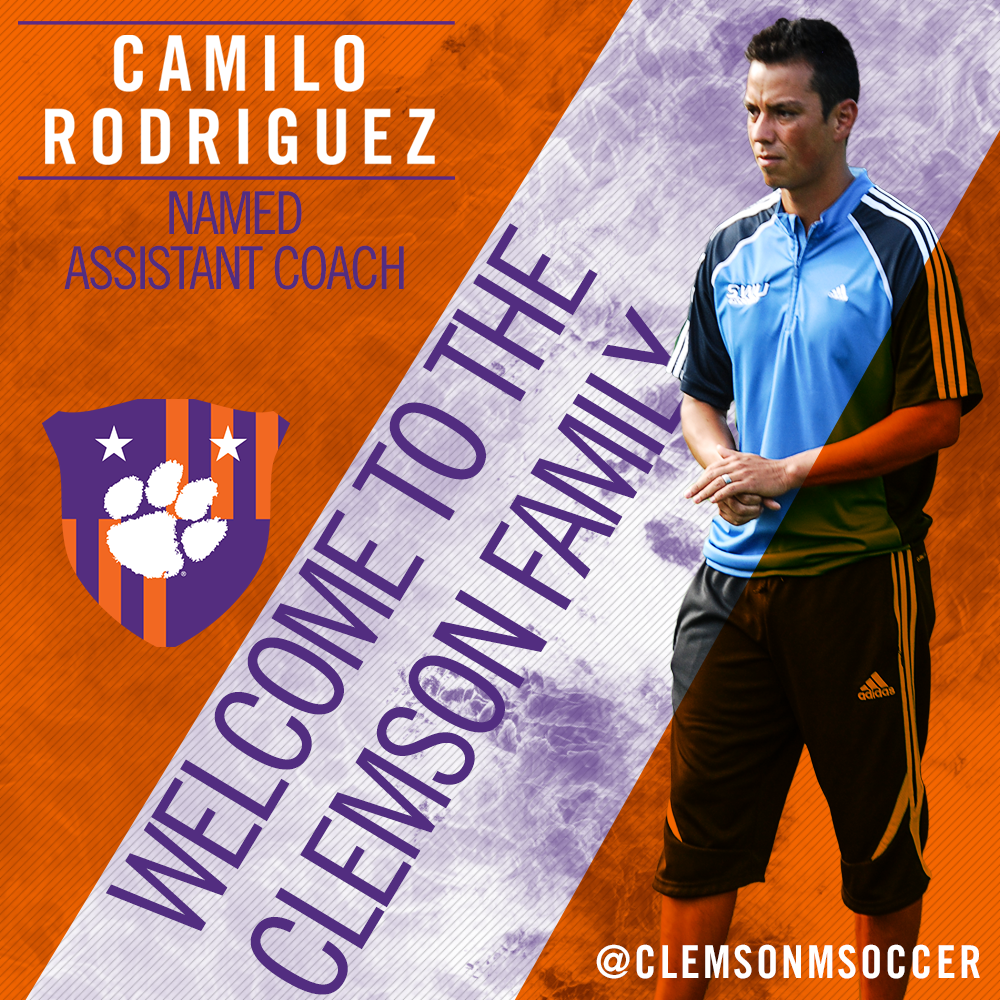 CLEMSON, S.C. — Camilo Rodriguez, who led Southern Wesleyan University to two NCCAAI National Championships in the past three years, has been named to the Clemson men’s soccer staff as an assistant coach. Rodriguez joins the Tigers after eight seasons as the head coach at Southern Wesleyan. He replaces Liam Curran, who has accepted a position as the Head of Academy Goalkeeping with the newest Major League Soccer expansion team, Atlanta United FC.

“I’m delighted that Camilo has agreed to come on board, and it just goes to show that sometimes you don’t have to go all the way to California to mine gold,” said Head Coach Mike Noonan. “Camilo’s experience as a successful head coach, with two national championship titles, will only add value to our staff as we continue our pursuit of winning more championships for the program. His expertise in training goalkeepers will continue to advance the quality of this vital position, which Clemson has become known for developing at a high level.”

In eight seasons as head coach at SWU, Rodriguez led the program to two national titles, in 2013 and 2015. The Warriors were ranked second in the final NCCAA rankings in 2013, and finished in the top 10 of the rankings each of the last four years. The program also finished in the top 25 in the NAIA rankings each of the last two years, while competing in the toughest NAIA conference in the country, with over six teams ranked those two seasons. SWU is just completing the transition phase from NAIA to NCAA Division II.

“I am thankful and honored for this opportunity, and am very grateful to the Clemson administration, Mike Noonan, Phil Jones and the rest of the staff for trusting me to be a part of their excellent group,” Rodriguez said. “Clemson soccer has a tremendous history, and I will do my best to add my experience and knowledge in order to help the program continue the success achieved over the last few years. I am looking forward to joining the department, campus and community, and to being a member of the Clemson Family!”

Rodriguez brings nearly 12 years of collegiate coaching experience, including in the professional ranks. He served as the assistant coach of the NPSL Upward Stars in 2014 and 2015, helping lead the program to its first South Atlantic Conference Championship. In 2006, he was the goalkeeper coach for the Charlotte Eagles of the USL second division.

The native of Bogota, Colombia, played collegiate soccer at Southern Wesleyan University from 2001-04. He was a goalkeeper on the Warriors’ 2003 team, which won the SSAC Championship and the NCCAA South Region Tournament, and advanced to the NCCAA National Championship match. Rodriguez also received several individual accolades while playing for SWU. In 2001 and 2002, he was named to the Georgia Alabama Carolina Conference Second Team, and added selections to the NAIA All-Region XIII Team and the NCCAA All-South Region Team in 2002.

Rodriguez graduated from Southern Wesleyan University in 2004 with a degree in Internet Computing Science and earned a master’s degree in Management from SWU in 2007. He and his wife, Stephanie, have one son, Luca.