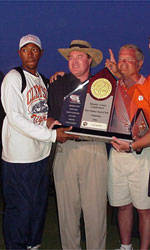 CLEMSON, S.C. – The Clemson men’s cross country, track and field teams will add 17 student-athletes to its rosters for the 2001-02 season, head coach Bob Pollock announced on Thursday. The Tigers’ recruiting class is highlighted by seven high school All-Americans and 12 high school state champions. This talented class will join 34 returnees who collectively won the Indoor and Outdoor ACC Championships in 2000-2001 and finished 20th at the NCAA Indoor Track and Field Championships.

A freshman from Raleigh, NC, Cameron Akers will compete in the hurdles for Clemson. Akers holds the NCISAA record in the 300m hurdles, and won the NCISAA state championships in the 110m hurdles and 300m hurdles. He earned All-American honors in the 110m hurdles at the national championships with a personal best time of 14.19 seconds. Akers was named the North Carolina State Track Most Valuable Performer as a result of his efforts at the state meet.

Michael Bolling, a freshman from Willingboro, NJ, will compete in the sprint and hurdle events for the Tigers this year. Bolling was a 2000 USATF All-American and the New Jersey state champion in the intermediate hurdles with a personal best of 53.10. He was named the 2000 South Jersey “All-Around Athlete of theYear”, and is an all-county, All-South Jersey and all-state honoree. Michael has personal best times in the 200m (21.30) and 400m (48.70).

A freshman from Baltimore, MD, Clifton Turner will compete in the sprints for Clemson. Turner was the 2000 state champion in 100m and a member of the 4×200 relay team that finished second in the state. He is a two-time member of the All-City team, as well as the state regional and city champion in the 100m in 1999. Turner was a two-time high school outdoor MVP(2000-2001)and was the team captain in 1999 and 2000.

Tiger football signee Airese Currie, a freshman from Columbia, SC, will compete in the sprint events for Clemson. Currie was an All-American in the 100m after finishing third at Nationals, and he was a member of the fifth-place 4x400m relay team. He was selected the South Carolina State Class AAAA Track Athlete of the Year after winning state championships in the 100m (10.40), 200m (21.17) and 4x100m relay.

A freshman from Red Bank, NJ, Derek Gilson will compete in the throws. Gilson is a three-time high school MVP, and was the 2000 Central Jersey Group IV state champion in the shot put. He placed sixth in the shot put at the 2001 New Balance Nationals, and holds the Middletown High School indoor and outdoor shot put record with a mark of 59’2″.

Brent Hobbs, a freshman from Stony Point, NY, will compete in the decathlon. Hobbs is a Nike All-American after finishing second in the pentathlon at the Nike National Indoor Classic with 3,377 points. He set four school records indoor as a senior and won three events at the county championships, including a best time of 8.37 in the 60m hurdles and 14.34 in the 110 hurdles, as well as a personal best mark of 6’8″ in the high jump, and 22’10” in the long jump.

Freshman Andrew Kessler, from St. Albans, WV, also will compete in the pole vault for the Tigers. Kessler finished fourth in the pole vault at the 2001 Penn Relays and was the 2001 West Virginia state indoor champion. He finished as the state runnerup both indoor and outdoor as a junior, and had a personal best of 15’11” at Fork Union Military Academy as a senior.

George Kitchens, a freshman from Hephzibah, GA, will compete in the jump and sprint events for Clemson. Kitchens was the 2001 AAAA long jump champion with a personal best of 24’6 3/4″, and was a three-time region champion in the long jump. He was voted

Steve Shive, a freshman from East Hartford, CT, also will compete in cross country and the distance events for Clemson. Shive was a four-time all-conference indoor and outdoor honoree in the 800m, 1000m, and 1600m while at East Hartford High School. He was named to the all-state teams in indoor and outdoor track for the 1000m (2:32.4) and 1600m (4:17), and was honored as an All-New England selection in the 1000m as a junior and senior.

“Our coaching staff is very excited about our newcomers combined with our returning athletes,” said head coach Bob Pollock. “This is a talented class of student-athletes that are anxious and excited to continue the success of our championship program.”

Clemson has won the ACC Indoor Track and Field Championships five years in a row, and has captured the Outdoor title four of the last five years.