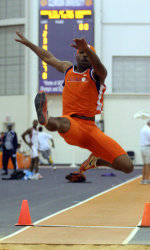 The second day of competition for the ACC Indoor Track & Field Championships was held Friday at Clemson’s indoor facility. George Fields highlighted the Tigers’ efforts on day two with an individual title in the long jump, while Jacoby Ford posted a record-setting performance in the 60m dash. He set an ACC standard with a time of 6.53 seconds, which is the top time in the country so far this year.

Four sprinters from Clemson qualified for Saturday’s final in the 60m dash. Ford’s time of 6.53 was by far the fastest, while C.J. Spiller (6.75), and Corey Brown (6.77) all qualified for the finals. Spiller’s time was a personal best.

Ryan Koontz earned a second-place finish in the heptathlon, despite setting the Clemson record in that competition. He totaled 5,531 points, which surpassed the previous best of 5,528 points by Joey O’Rourke posted 4,769 points, good enough for an eighth-place finish for the red-shirt freshman.

Koontz (8.21) and Lydell Perry (8.27) both ran in the 60m hurdles prelims, but did not qualify for Saturday’s final. Perry has fought nagging injuries throughout the 2007 indoor season.

Matt Clark earned his first-ever All-ACC honor in track & field after finishying third in the 5000m run. He posted a time of 14:18.32, finishing behind Andrew Lemoncello (Florida State) and Wesley Smith (N.C. State).

In the distance medley relay, Magidi took the handoff for the 1600m portion of the event in 10th place. He quickly moved up and helped the Tiger team to a fifth-place finish. Clemson had a time of 10:00.62, its best time of the season in that event.

Fields won his first-ever ACC long jump title with a leap of 24’5.5″. He achieved the mark on his second jump of the afternoon. He is Clemson’s first champion in that event since George Kitchens claimed the title in 2005, and just the third Tiger ever to claim the long jump crown. Corey Brown finished ninth with a mark of 22’6.25″ in his first-ever collegiate long jump competition.

Adam Linkenauger’s three-year reign as indoor high jump champion came to an end Friday, as Jerome Miller of Georgia Tech cleared 7’1″ on his second attempt to take the title. Linkenauger finished third with a clearance of 6’11.5″ and has earned four All-ACC honors in the indoor version of that event.

The final day of competition will get underway for the men’s team with the shot put and triple jump at 11:00 AM Saturday.