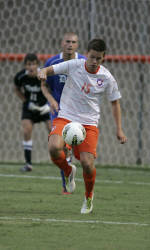 The two teams were knotted at 1-1 in the final minute of the second overtime period, when Benediktsson received a long clearance and recorded the winning goal with just :29 seconds left in the game. Iain Smith was credited with the assist. This was Benediktsson’s second goal this year.

Both teams recorded a goal in the first half of play. The Wolfpack struck first in the 22nd minute of action. Nazmi Albadawi and Monbo Bokar worked a quick give-and-go into the box, and Albadawi notched his second tally of the season at the 21:34 mark.

The lead would not last long however, as Clemson found the back of the net just :31 seconds later. Ara Amirkhanian took a shot from 25 yards out that was deflected by a Pack defender and rolled into the net at the 22:05 mark. This was his first goal of the season.

NC State was awarded a penalty kick in the 70th minute, but Justin Willis’ attempt was saved by Clemson keeper Cody Mizell.

The Pack outshot Clemson 19-12 on the day, with the Tiger’s Mizell making eight saves in goal compared to three saves for the Wolfpack’s Fabian Otte.

Clemson will play host to Gardner-Webb on Tuesday, September 27, in the Tigers’ next action.