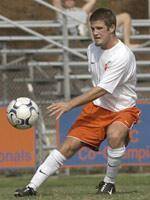 CLEMSON, SC–Senior, forward Steven Rhyne scored three goals in 3:15 in recording his first hat trick of his career in leading Clemson to a 5-0 win over Lipscomb in a men’s intercollegiate soccer match at Clemson, SC Wednesday night. This was the quickest hat trick in school history.

This was the season opener for both teams. Rhyne who missed last year because of an injury also had one assist in the match. He is a native of Alpharetta, GA. It was also the first hat trick since the 2001 season when Dimelon Westfield scored three goals vs. Davidson on October 21, 2001. Rhyne’s hat trick is the 95th in school history.

Freshman Nathan Sturgis scored the first two goals for the Tigers in giving Clemson a 2-0 at the half. Rhyne scored his first goal at the 75:34 mark. In only :56 seconds later, he scored his second goal with assists by Olatomiwa Ogunsola and Landy Mattison. Rhyne scored again at the 79:49 mark with an assist by Hector Quintanar.

“I was pleased with the win and our performance tonight. Our defense continues to play well with Landy Mattison and Justin Moore in the middle. Steven Rhyne played well, and when he started to relax he scored three goals. Lipscomb played well and did a great job for a new Division I program. Overall, I am pleased in the progress we have made, and we are starting to get our players back and off the injured list.”