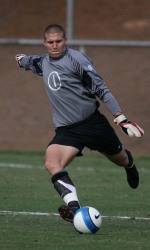 Clemson, SC — Clemson goalkeeper Joe Bendik and defender David Newton were both named to the third-team NSCAA/Adidas All-South team on Wednesday. Both are juniors and will return to lead Trevor Adair’s Clemson team in 2009. They were both named second-team All-ACC earlier this season.

Bendik is a native of Marietta, GA and led the ACC in saves per game and total saves this past year. He had 92 saves for the season on the way to recording three shutouts. He started all 18 games for the Tigers, and ranked third in the ACC in save percentage with a .767 figure.

Newton, a native of Mount Pleasant, SC, started 16 of the 18 games as a defender and had one assist from his defender position. He was a big reason Clemson allowed just 28 goals in 18 games this year. He also provided a key role in Clemson’s wins over fourth ranked Maryland and seventh ranked North Carolina, two of the teams in the NCAA Final Four this weekend. It is one of just three losses for Maryland all year.

“I am very happy for both of these young men,” said Adair. “They are both juniors and will provide great leadership for us as seniors in 2009. “

Thirteen of the 33 student-athletes honored on the three teams were members of ACC teams, an example of the dominance of the ACC in men’s soccer.