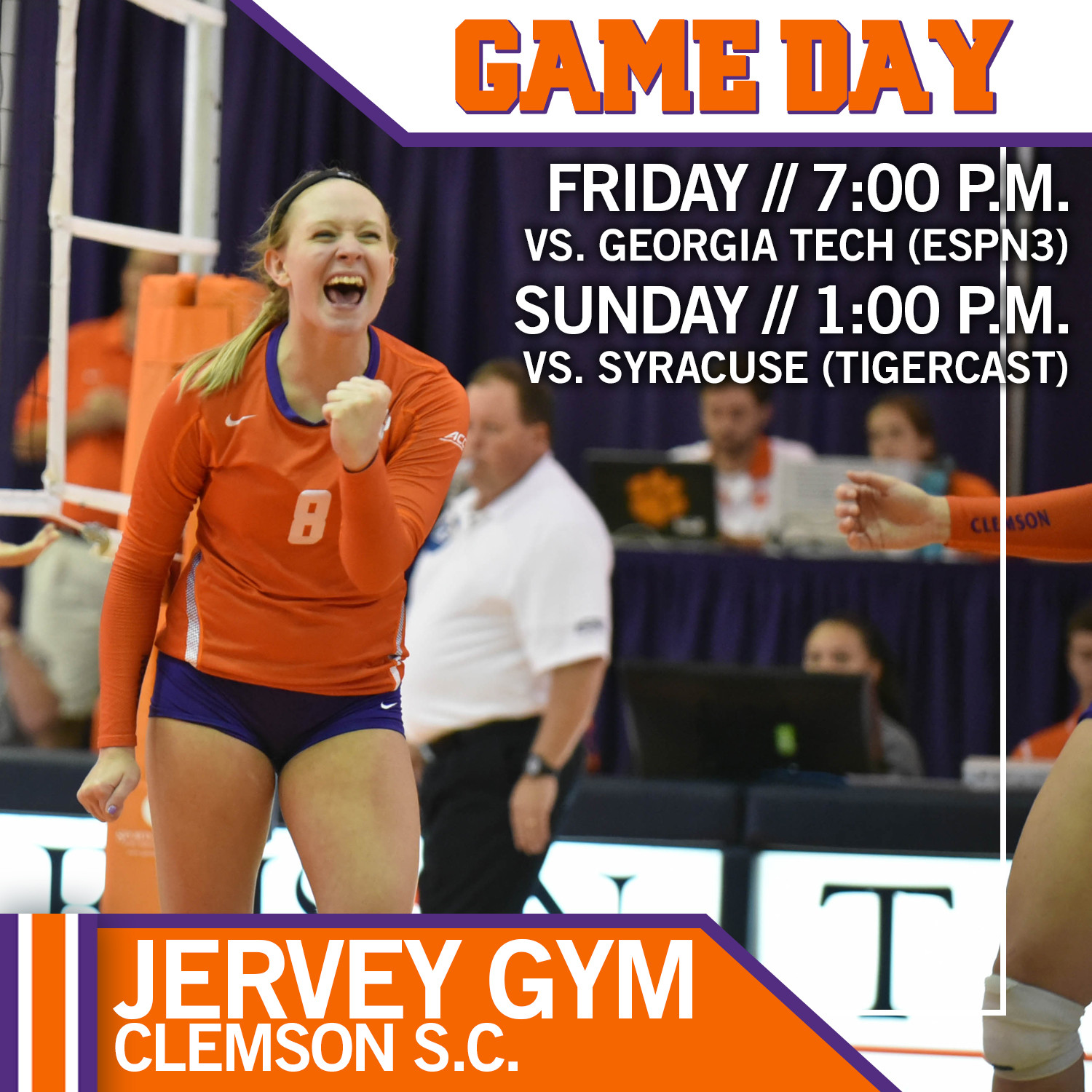 CLEMSON, S.C. – The wait is over as Clemson (5-7) hosts ACC foes, Georgia Tech (9-3) and Syracuse (9-2) in Jervey Gym this weekend. The Tigers will open conference play against the Yellow Jackets at 7:00 p.m., on Friday and will conclude the weekend Sunday with a 1:00 p.m., matchup with the Orange.

“This should be a challenging weekend for us.  Both Georgia Tech and Syracuse have had good preseasons,” said head coach Hugh Hernesman. “There’s a level of physicality that we’ll be facing that we faced last weekend at SMU and these kids are not unaccustomed to playing at a high, physical level.”

“For our younger players, they’ve seen it in bits and pieces in club and now over the last four weeks, so they know they need to play at a different level and I feel like they’re continuing to improve and adapt as we go.”

One freshman in particular that has responded well is Kailey Harvell. The freshman out of Tallahassee, Florida is second on the team in kills (135) and kills per set (3.07) and improved her game as the weekend in Dallas went on. After just converting on seven of her attempts against SMU, Harvell bounced back to kill 12 balls against UTSA and 15 against TCU.

“Seeing three very solid teams at SMU was great for our growth and expectations.  SMU is 17th in the RPI right now with a Top 25 win, UTSA was coming off a Top 25 win and TCU is going to have a strong year in the Big 12.  They’re just coming off pushing Texas last night.”

After what the coaches saw in four-set battles with UTSA and TCU, the staff is excited to see this young Clemson team compete in an elite volleyball conference as much as they are excited to get their first look ACC.

“I’m just looking forward to learning more about the ACC up close and personal,” Hernesman said. “There are so many talented coaches and players in the league and the conference profile has grown so much recently, that this is a premier league to play in, coach in and watch.”

“The next step is to get into these matches and learn more about the what makes these programs tick.  You can only learn so much watching film.  But now is the time for all of us to crank it up a notch from a preparation standpoint and a competitive standpoint.”

“I like the way this team fights and competes.  We’re learning to generate that competitive edge in training during the week and from the outset in matches.  It’s all a process that we’ve seen before, so I most look forward to Friday’s match and to see how we can keep it going.  We’ll gauge that this weekend and these matches to help show what we need to work on the next week, but we feel like we got better in the last 7 days.”

Clemson is coming off one of its better defensive matches against TCU as the Tigers connected for 67 digs with three players digging in double-figures. Sydney Moseley finished just two digs away from the double-digits and Kennedy Wilson-Talmadge was just a dig shy of her first career match with 10 or more.

Leading this weekend was Keelie Arneson as she recorded 63 digs over the course of 12 sets. The effort moved her within striking distance of the NCAA’s top 25 list of all-time career digs leaders. 46 digs this weekend would give her 2,399 career digs, tying her for 25th in NCAA history.

She set her single-match career high of 46 digs last season in five sets against Jacksonville State. Also, Arneson has recorded 46 digs in a two-match span twice this season.

Notes (in 140 characters or less)  • Clemson’s eight freshmen is the highest total in the Atlantic Coast Conference.• Hugh Hernesman is the ninth head coach in Clemson volleyball history.• Clemson is currently fourth in the ACC, averaging 15.20 digs per set.• Keelie Arneson is 46 digs away from cracking the NCAA’s all-time list of top 25 digs.• If Keelie Arneson duplicates her ‘13 performance (712 digs) she will have the second most digs everrecorded in D-I women’s volleyball.• Keelie Arneson ranks 23rd in NCAA history with a career 5.29 digs per set average.• Keelie Arneson currently leads the ACC with a 5.29 digs per set average.• Keelie Arneson’s 5.29 digs per set average ranks her 16th in the nation and is the second best average in a power five conference.• Leah Perri headlines the Clemson attack with 165 kills in 2015 which is the fourth most in the ACC.• Leah Perri ranks sixth in the conference with a 3.75 kills per set average.• Leah Perri is second in the ACC with 191.5 points and ranks third with 4.38 points per set.• Leah Perri has double-digit kills in 10-of-12 matches this season.• Kate Federico ranks sixth in the conference averaging 8.94 assists per set.• Kate Federico ranks seventh in the conference with 395 assists.• Kate Federico has six double-doubles this season and eight matches with 30 assists or more.• Kate Federico’s 1,171 assists last year are the second most ever recorded by a Clemson freshman.• Kate Federico’s 1,171 assists in 2014 was the second highest total in the ACC and the most recorded by a freshman.• Kate Federico’s 1,171 assists are the most recorded by a Tiger in the last five years.• Kailey Harvell has recorded 10 or more kills in nine of Clemson’s 12 matches this season.• Kailey Harvell is second on the team an not far behind Leah Perri with 135 kills and a 3.07 kills per set average.