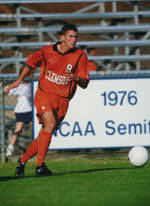 CLEMSON, S.C. — The #9 ranked Clemson Tiger men’s soccer team scored two first half goals and took a 2-1 lead into the lockerroom at the half but could not hold off a resurgent Virginia Cavalier offense as they dropped their third ACC game, 3-2 today October 15 at Historic Riggs Field.

Tiger sophomore Fabio Tambosi scored the first goal of the match at the 9:18 mark. Freshman Steven Rhyne assisted on the play, sending a short ball to Tambosi who sent a curving ball into the net. The Cavaliers tied the score 16 minutes later when Ryan Gibbs took a pass from Eric Solomon and buried it into the back of the net past Clemson goalie Doug Warren. Tiger freshman Ricky Lewis would add a goal just before the half. Senior Mike Potempa, who would be ejected with a red card with just 59 seconds left to play, sent a long ball to sophomore Ian Fuller who crossed to Lewis at the back post.

The Tigers took the 2-1 lead into the half, but failed to put the Cavaliers away in the second half of play. Alecko Eskandarian and Kenny Arena scored to win the game for Virginia. Arena scored the game-winner at the 76:13 mark. He was assisted by Kyle Martino.

Clemson will be in action again Wednesday, October 25 when they will play host to in-state rival Furman. Game time is set for 7:00 p.m.