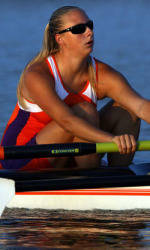 Clemson, SC – The Collegiate Rowing Coaches Association (CRCA) announced on Monday that Clemson rowers Suzanne Van Fleet and Jessica Leidecker have been named to the Division 1 Pocock All-America Team. Van Fleet was named to the first-team, while Leidecker was a second-team selection. This award recognizes outstanding performances of individual rowers and coxswains at NCAA Division 1 institutions.

Van Fleet spent the entire season with the Varsity 8+ crew, which advanced to the NCAA Rowing Championships for the first time in school history. They were ranked as high as #12 in the nation during the season, which ties the school record for highest ranking. Van Fleet, a senior, was named to the All-Region team by the CRCA, as well as the All-ACC team this season. Van Fleet has had a very successful rowing career, competing and winning a bronze medal in the Under 23 World Rowing Championships with the United States team last summer.

Leidecker, a junior, spent the majority of the season stroking Varsity 8+ boat. In addition to being named second-team All-American, she was a first-team All -Region honoree, as well as an All-ACC selection.

“I am very proud of both Suzanne and Jessica. They have grown a great deal this past season and very deserving of this honor,” said Head Coach Richard Ruggieri. “I am sure they would want to thank all of their teammates because without them the drive to get better would be very difficult.”

This marks only the second time in program history that two athletes were named to the All-America team in the same year. Only four Clemson rowers have received this honor in the past.