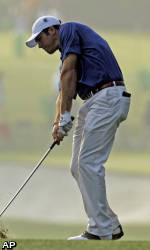 Nice Start to Special Day Corbin Mills showed today that he was not totally consumed by playing in the Masters. He found time to do two nice things for his family. First, he picked his sister Brooke up where his family was staying and drove her down Magnolia Lane to the Masters Clubhouse. He then took advantage of the players privilege he had earned and took his sister to breakfast at the Clubhouse.

“Today is Brooke’s birthday and I thought of the idea last night,” said Corbin.” I am trying to take care of as many birthday presents as I can this week. On Tuesday it was my mom’s birthday and she spent the day following me, Jonathan and Lucas in the practice round, then had her picture made with all of us.”

Mills good deeds did not end with breakfast with Brooke. Just before he teed off he walked 25 yards up the fairway on the right side to the ropes and gave his mother a hug. Nice way to start the day. “That was the best,” said Mills mother, Kristi, who did not miss a shot on Thursday.

The First Shot Mills hit his first shot of the day at 11:22 AM. He was paired with Simon Dyson and Sandy Lyle. Mills hit the last drive of the threesome on the opening hole and perhaps that was a good thing. Dyson and Lyle both hit the ball down the middle and it put good swing thoughts in Mills’ head. The Clemson junior drove the ball perfectly down the middle, 20 yards left of the trap on the right side of the fairway that gobbles up many opening shots. Mills outdrove his competitors by 25 yards on that first hole. He then hit his approach to within 15 feet of the hole and made an easy par.

It brought back memories for me of Chris Patton’s first drive in the 1990 Masters. After an opening round 71, Patton was the darling of the media. When he went into the interview room they asked him if he was nervous on that opening shot. In typical Patton down home humor he said, ” I just didn’t want to get up there and dig up a big hunk of sod with that first drive.”

Mills certainly didn’t take up the sod and he drove the ball pretty well all day. With a 274.5 yard average. It led to him hitting 13 of 18 greens, tied for 14th best in the field, second best among the amateurs. Patrick Cantlay of UCLA hit 14 of 18 greens.

Four Tigers on the Course When Jonathan Byrd struck his tee shot on the first hole at 12:25 PM on Thursday, four Clemson golfers were on the course at the same time, a first for the program at the Masters. At the time, Lucas Glover was on the 11th hole, Kyle Stanley was on 10 and Corbin Mills was at the sixth.

Clemson’s four golfers in the field rank second to the five by Oklahoma State. Team Clemson was a combined eight over par today, rounds of 75 by Glover and Stanley, 74 by Mills and 72 by Jonathan Byrd. Oklahoma State had the upper hand on the Tigers after the first round as their five players were a combined +4.

Corbin’s First Round Chris Patton’s shot an opening 71 in his first career round at the 1990 Masters after winning the 1989 US Amateur the August before his senior year at Clemson. Mills tied Danny Ellis as the second best opening round for a Clemson amateur. Ellis, who was the US Amateur runnerup in 1993, the summer after his senior year at Clemson, had a 74 in his first round at the 1994 Masters.

As far as any former Clemson golfer at the Masters, Mills 74 was tied for fourth best first career round. Patton’s 71 is the best first round by any golfer with ties to Clemson. Lucas Glover had a 73 in his first round at Augusta in 2006. But both of them were professionals at the time.

Can He Make the Cut? Mills will try to end a puzzling trend by golfers with ties to Clemson at the Masters. Of the 10 previous Clemson golfers to play the Masters, just two have made an improvement in their second career round compared to their first. One might think there would be improvement after opening round jitters. But, Dillard Pruitt (75 to a 68 in 1992) and Michael Hoey (75 to 73 in 2002) are the only former Tigers to show improvement from their first round to the second. Mills might have to do that on Friday if the cut is to the low 44 and ties. But, he also could make the cut due to the 10-shot rule. Mills was tied for 57th at 5:30 PM, but was seven shots from the lead (67 by Lee Westwood).

Mills is tied for third after the first round among the six amateur players. Hidecki Matsuyama, the Asian Amateur Champion, and US Amateur runnerup Patrick Cantlay of UCLA had rounds of one-under-par 71. Kelly Kraft of SMU, the US Amateur Champion, and Mills, who qualified by winning the US Public Links, both had rounds of 74. It is fitting that they are tied. They teamed in January at the World Amateur tournament in Australia to lead the US to the team title.

Bryden Macpherson of Georgia and the 2011 British Amateur Champion, had a 77 and Randal Lewis, the US Mid-Amateur Champion (golfers 25 and older), shot an 81.

The low amateur is honored at the final ceremonies on Sunday along with the champion and is interviewed on CBS with Jim Nantz in the Butler Cabin.

Friday will be a long day for Mills as far as the cut is concerned. He has one of the first tee times of the day (8:12 AM) so it will be about a six hour wait to see what the final cut is after he completes his round.

Furman, Augusta National, What’s the Difference Mills opening round 74 today was the same opening round score he has had in each of his last two college events, the USA-Aiken Intercollegiate (March 5) and the Furman Invitational (March 16). The stakes weren’t quite as high for those events. Mills is a player who usually shows improvement as the tournament goes along. For Clemson this year he averages 71.86 in opening rounds of tournaments and has a 69.71 stroke average in final rounds. His final round stroke average is second best in the nation this year.

Corbin Mills Comments “I had a blast out there today. I am happy with the way I played. I could have been more aggressive with the putter because I left some birdie putts short. But, you can get in trouble on this course hitting it past the hole (as he did on 10 when he three putted from a down hill attempt from 30 feet). But, Par is a good score here and I made a lot of pars (four bogeys and two birdies for the day).

“I just felt great out there today. I have had a good week of preparation. Playing the practice rounds with Lucas (Glover) and Jonathan (Byrd) helped me because I felt relaxed that day. And playing in front of the crowds in the practice rounds helped also.

“Playing the par three tournament with Tom Watson and Ben Crenshaw also helped. I was pretty nervous playing with them, but the experience helped me quite a bit.

“I don’t have a specific goal to make the cut or be the low amateur. My goal is to play well, have fun and see what happens.

“Jordan (Byrd, his caddie) did a great job of keeping me focused and making good decisions. It is great to have him on the bag.

Mills Shots of the Day Mills best shot of the day might have come on the par four seventh hole. Not a famous hole by Masters standards, Mills had to make a miracle comeback to make the four. His drive went to the right in the middle of the tree line and he was forced to punch out off the pine straw. He hit his pitch to about 100 yards. The pin was up front and the front of the green is guarded by a pair of large bunkers. Hit it short and you are in big trouble because there is no green to work with.

Mills used a 51-degree lofted club and hit the ball by the hole to the top shelf. The ball spun back to within four feet of the cup. He then made the putt to save par and remain at one-over-par. He then birdied the eighth hole when he made a 12 foot putt and finished the first nine with a par on the ninth hole, giving him an even par 36 for his first nine holes at Augusta National.

Mills played the par four 17th hole flawlessly. His drive was right down the middle and left him just an easy 125 yard shot to the hole. He knocked his second shot pin-high seven feet to the right of the hole. He then drained the putt for his second birdie of the day.

That birdie and an easy par (on a difficult driving hole) on the 18th hole put a good finish to his first career round in a professional tournament.

Byrd’s Big Day Jonathan Byrd had a great year in 2011 with a number-22 finish on the PGA Tour money list, the highest finish of his 10-year career. But, he would be the first to tell you he was disappointed in his performance in the Majors. He missed the cut in all four Majors and did not have a score of par or better in all eight rounds.

But, he ended that streak with an even par 72 on Thursday. He had two birdies and two bogeys to go with 14 pars in a clean round of golf. “When you shoot even par at Augusta National you have to be pretty pleased,” said Byrd, who was the best Clemson performer of the day. “I put myself in a bad position when I was two over for the first four holes, but I played well after that, going two under the last 14 holes.

“I have nerves for every event I play in and that is the case here because I especially want to do well here.

Byrd’s even par 72 was his best at Augusta since he shot a final round 72 in 2003, his first career Masters. That year Byrd shot an even par 288 for the four rounds and finished eighth, the best finish by a former Clemson golfer at Augusta. Today was the first time he has shot even par at Augusta since then. He had averaged just over 75 for his last six rounds prior to today.

Byrd on Mills “That was a good score for Corbin. He played well when we played on Tuesday and I told him to just go out and have fun. He has the game to have a good score on this course.

Friday Tee Times Weather is suppose to be poor in the morning. Weather permitting, Mills will be the first Tiger on the course with an 8:12 start. Byrd’s group begins at 9:07 AM, Glover at 12:25 PM and Stanley at 12:36 PM. The last group of the day begins at 1:53 PM, a group that features Luke Donald. Tiger Woods tees off at 1:42 PM on Friday.