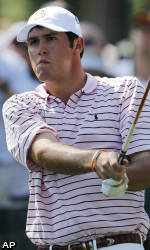 A Great Day for Clemson Golf While the scores did not count, it would have to be called one of the best days in Clemson golf history. No Lucas Glover didn’t win the US Open today and Glover and Byrd didn’t go head to head in a playoff in Charlotte. Kyle Stanley did not overcome a six shot deficit to win the Phoenix Open. Clemson didn’t win the National Championship.

But, for the first time three golfers with ties to Clemson played together at Augusta National. It was only a practice round, but it was a day of pride for the program as Lucas Glover, Kyle Stanley, played an 8:30 AM practice round with Phil Mickelson).

“It was a really good day,” said Byrd, an All-American for the Tigers between 1997-2000 who was inducted into the Clemson Ring of Honor this past fall. “You try to treat this tournament like any other from a preparation standpoint. Today was relaxed. I was playing with two friends from Clemson and my brother was walking with us (Jordan Byrd who is Corbin Mills caddie for the event). The weather was great, everything about today was great.”

With four golfers in the field, Clemson has the second most representatives in the Masters. There are five former Oklahoma State players. This is the first time Clemson has had four former players in the Masters. In fact the previous high was two in 2008, 2010 and 2011. Byrd and Glover are both making their fifth Masters appearance.

For the Record For the record, we don’t know the scores of the players for the round as there were some practice (second) shots mixed in, but there was a skins game. Glover and Mills tied with six skins to Byrd’s three. Glover had a hot back nine with birdies on the 11th, 12th, 13th and 15th holes.

Byrd had some miraculous saves, including an impossible shot from the right pine straw on the 17th hole. Byrd had about five trees to negotiate. Some players don’t hit shots from difficult positions in practice rounds, but that is not Byrd’s style. After the urging of the patrons, Byrd lined up over the shot and said, “Where is the pin.”

The patrons thought Byrd was joking and it brought a laugh because he really had no idea where the green was from his vantage point. But, he wasn’t joking and he nailed a shot under tree limbs and rifled the ball to the green side bunker,

Mills out-drove his professional competitors on the ninth and 18th holes by a good 15 yards and made birdies on both. He hit a nine iron to within two feet on the ninth hole and a nine iron from 152 yards to 10 feet on 18. He made both birdie putts to put an impressive bow on each nine.

All three Tigers hit shots to within 15 feet of the pin on the par three 12th hole, a hole that can make or break the tournament on Sunday. Glover made his eight foot putt for birdie, while the others made par.

Glover brought the biggest roar from the crowd on Tuesday when he hit his second shot on the par five 13th from the pine straw on the right side of the hole to within 10 feet. He missed the eagle putt, but made birdie. It was not Phil Mickelson’s miracle shot from a couple years back, but it was close.

What the Pros think about Corbin Mills “Corbin has good length and a good touch around the greens. The key for him will be patience, patience, patience. When you come here and you are young you want to go for every par five in two. Sometimes that is not the right play. Today was the first time I played with Corbin, but I was impressed.” – Lucas Glover

“When he asked for advice I gave it to him. Lucas and are playing in our fifth Masters, so there are some places you don’t want to be. He hits the ball long and hits it high. His game fits this course.” – Jonathan Byrd

The Pairings Mills will hit his first shot at Augusta that counts at 11:19 AM on Thursday. He is paired with Simon Dyson of England and former Masters Champion Sandy Lyle of Scotland. So residents from England, Scotland and Easley will be paired together for the first two days. The same group will start at 8:12 AM on Friday.

Lucas Glover and Kyle Stanley will be in back-to-back groups both days. Glover will play with Kyung,-Tae Kim of Korea and Aaron Baddeley of Australia in the first two rounds. On Thursday the group begins at 9:07 AM and on Friday they start at 12:25 PM. Stanley will be in the next group on Thursday as he is paired with Jason Day of Australia and Bill Haas of Greenville, SC. They start at 9:18 on Thursday and 12:36 PM on Friday.

Byrd is the last former Tiger off the first tee in the opening round. He is paired with John Senden of Australia and Paul Casey of England and they will begin at 12:25 PM on Thursday and 9:07 AM on Friday.

2012 Masters Leader BoardNote: Scoring updates will be available once the tournament begins on Thursday, April 5.

Skipping on 16 One of the Masters traditions takes place on the 16th hole. During practice rounds players hit a normal shot from the tee box, then walk to the front of the pond by the tee box and attempt to hit a line drive skip shot off the water and onto the green. All three Tigers accomplished the feat, but Byrd required two attempts. Mills would have won a closest to the pin “skip shot.” contest as his shot finished 20 feet from the pin.

The best “Skip Shot” by a former Tiger at a practice round at the Masters took place in 2010 when Ben Martin’s shot landed two inches from the pin.

Playing with Legends While it was a thrill for Mills to play with former Tigers Lucas Glover on Tuesday, he will take it up a notch at the par three contest on Wednesday. He is scheduled to play with Tom Watson and Ben Crenshaw. “When I registered they asked me to sign up for the par three contest. There was a space open next to their names, so I said, `I have to do it!”

Fashion of the Day Jonathan Byrd won the Clemson fashion contest on Tuesday. Not only did he wear orange pants, but he had a purple belt with orange Tiger Paws. Mills wore a light shirt and white pants with a Masters golf hat. He of course had his Clemson bag with a big Tiger paw and sported his purple Clemson golf shoes with an orange Tiger paw.

Comfortable with his Caddie Clemson Assistant Coach Jordan Byrd will be Mills’ caddie for the Masters. “I am very comfortable with Jordan,” said Mills. “He is a good friend in addition to being my coach. I can ask him anything. He knows my game and he keeps me calm.

`Now, I am not going to say, `Come on caddie lets go,” said Mills with a smile.

Corbin Mills on His Day “I was satisfied with the way I played. Most importantly I am getting more and more comfortable with being here. I was shaky yesterday and a little shaky the first couple of holes today.

“Playing with Lucas and Jonathan certainly was great for me because I was at ease with them. I learned a lot from them as far as targets and committing to a shot. I am sure I will be nervous on the first tee on Thursday. But so will Jonathan and Lucas. This is Augusta, everyone is nervous.

“This was an historic day for Clemson golf. I didn’t really think about it until the end of the day. It was an honor to play with two Clemson golf legends I have looked up to.”