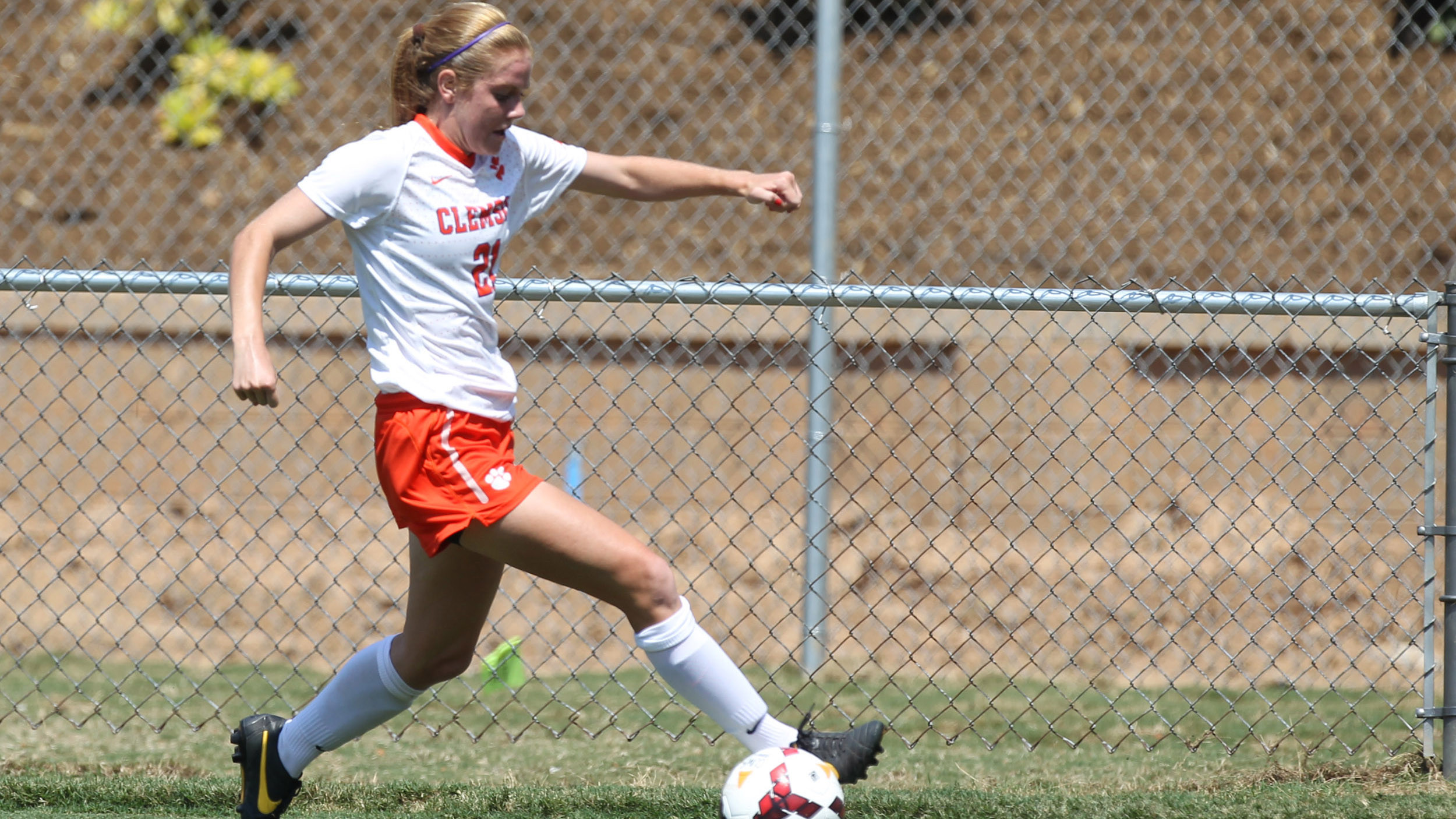 CLEMSON, SC – The Clemson women’s soccer team will begin play in the Atlantic Coast Conference this weekend as they play host to Maryland and Boston College.  The Tigers will square off against the Terrapins Thursday at 7 PM before facing the Eagles Sunday at 1 PM at Historic Riggs Field.

Both games will be broadcast live on ClemsonTigers.com via ESPN3.  In addition, fans can follow the Tigers on Twitter @clemsonwsoccer for score and statistical updates throughout the game.

Clemson improved its record to 2-1-2 on the season after a 2-0 victory over Davidson Sunday afternoon at Historic Riggs Field.  Freshman forward Catrina Atanda scored both Tiger goals to bring her season total to a team-leading three.  Freshman Abby Jones and sophomore Jenna Polonsky assisted on Atanda’s goals in the win over the Wildcats.  Freshman keeper Kailen Sheridan has posted 10 saves and recorded three shutouts, and has played all 490 minutes in goal for Clemson so far this year.

Maryland (4-2) is ranked 21st nationally by the NSCAA and 24th according to Soccer America.  The Terrapins are coming off back-to-back losses to ranked California teams on the road, falling to #22 Santa Clara 1-0 on Friday and #4 Stanford 3-0 on Sunday.  The Terrapins are led in scoring by Hayley Brock who has six goals and two assists for 14 points on the season.

Thursday’s match between Clemson and Maryland will be the 24th in series history, with the Terrapins holding a 14-8-1 advantage all time.  The Tigers have a 6-4-1 record in matches played at Historic Riggs Field, however Maryland won the most recent meeting between the two teams at Riggs, a 2-1 victory on September 29, 2011.

Boston College is 3-2 on the year and will open its conference slate at Pittsburgh Thursday before travelling to Clemson to take on the Tigers Sunday.  Most recently, the Eagles defeated Ohio State 1-0 behind a goal from leading scorer McKenzie Meehan, who has five goals for the season.  Sunday’s game will be a battle of teams with twins, as Clemson has the Byorth twins (Emily and Gabby) and Boston College has the Meehan twins (Madison and McKenzie).

The battle between the Tigers and Eagles will be the 10th overall between the two teams, with Boston College leading the series with a 7-1-1 record.  The most recent meeting between the two teams at Historic Riggs Field was a 3-0 victory for the Eagles, who were ranked fifth nationally at the time, on October 2, 2011.