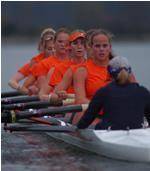 Clemson head rowing coach Susie Lueck has announced the team’s 2004 fall race schedule. The fall semester is geared toward aerobic conditioning in preparation for the spring race season. The team puts in miles and miles of rowing to train the aerobic base of each student-athlete.

The fall race schedule is an opportunity for the team to have a few competitive opportunities to gauge their progress. Unlike the spring races, the fall races are typically 3 miles (5 kilometers) in length. The fall race courses have multiple turns and may even have bridges to navigate. Crews start single file in a sort of time trial and compete against the clock.

The competitive fall season officially opens at home on Lake Hartwell with the “Tail of the Tiger” regatta on September 25th. Three weeks later the Tigers host the annual intersquad Class Day Regatta in which the sophomores, juniors, and seniors race each other in boats representing each class. The freshmen also race against each other. This will be the second year in which the alumni race in their own event as well. The weekend also serves as the rowing program’s parents weekend.

The following weekend Lueck will take the Tigers’ top rowers to Boston, MA for the prestigious Head of the Charles Regatta where they will face top national programs.

“The teams at the Head of the Charles are strong and give us a chance to challenge ourselves early in the year,” Lueck said.

The last weekend in October is the Head of the Tennessee in Knoxville, TN, where the Tigers will compete against the University of Tennessee.

“Tennessee has earned an invitation to race in the NCAA Championships the past two years. Having an opportunity to compete in multiple events with them will be exciting.”

The Tigers will conclude their fall season at the Head of the Chattahoochee in Gainesville, GA on the 1996 Olympic course the first weekend in November. The Head of the Hooch is the largest one day fall regatta in the nation.