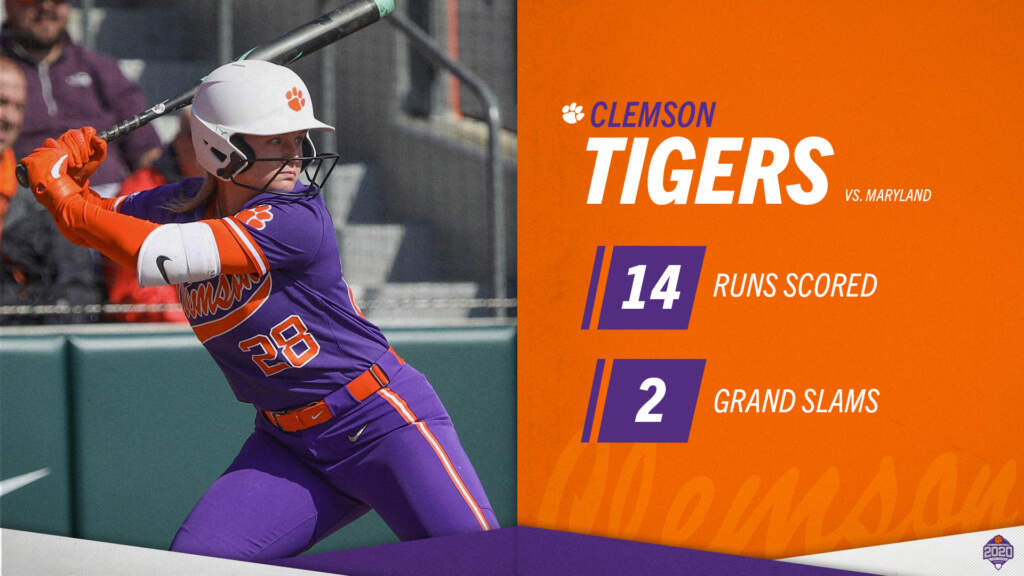 CLEMSON, S.C. – After scoring 12 runs in the seventh inning against St. John’s less than one week ago, the Clemson Softball team dialed up 14 runs in the second inning on the way to winning Saturday’s contest 21-2 over Maryland at Clemson Softball Stadium. The first-year Tigers, who are riding a three-game win streak, are now one win over .500 at 5-4 overall. Clemson’s explosive offensive performance was led by freshman right-handed pitcher/outfielder Valerie Cagle, who homered twice on the day, including a grand slam in the second and a three-run shot in the third, and infielder Bailey Taylor who also hit a grand slam in three batters prior to Cagle the same inning. Taylor went 2-for-2 on the day.

Junior Marissa Guimbarda got things started for the Tigers in the first after hitting a three-run shot to center field. The homer was Guimbarda’s 27th of her career, third of the season and second to center field in as many games, having hit one against Terps in Friday’s 5-1 decision.

🎯🎯🎯 Once again, GUIMBARDA GETS US ON THE BOARD!!

For the second straight game, she goes yard to CF – this one's a three-run shot! Tigers lead, 3-0!

Clemson cycled through the lineup twice in the top of the second as a total of 19 Tigers entered the batter’s box in the inning. In addition to both Bailey and Cagle’s grand slams, Clemson’s Grace Mattimore, MK Bonamy and Hannah Goodwin all recorded at least one RBI for the Tigers in the second. Bonamy finished Saturday’s contest 3-for-3 at the plate.

Valerie Cagle, the 15th batter of this inning, ropes one over the right-field fence. That's her third homer of the season. Tigers lead 17-0.

Valerie Cagle is ON FIRE 🔥🥵That makes two home runs for her this game.

Her three-run shot over left field puts the Tigers up 21-0.

Maryland scored two in the bottom of the fifth on back-to-back doubles down the left field line with runners on base.

Freshman righty Logan Caymol got the start in the circle and the win as she improved to 3-1 on the season. Caymol pitched 3.0 innings and retired nine of her 12 batters faced.

Up next, Clemson takes on Michigan State approximately 30 minutes after the conclusion of Saturday’s game between Pitt and the Spartans, which began at 4:18 p.m. at Clemson Softball Stadium. 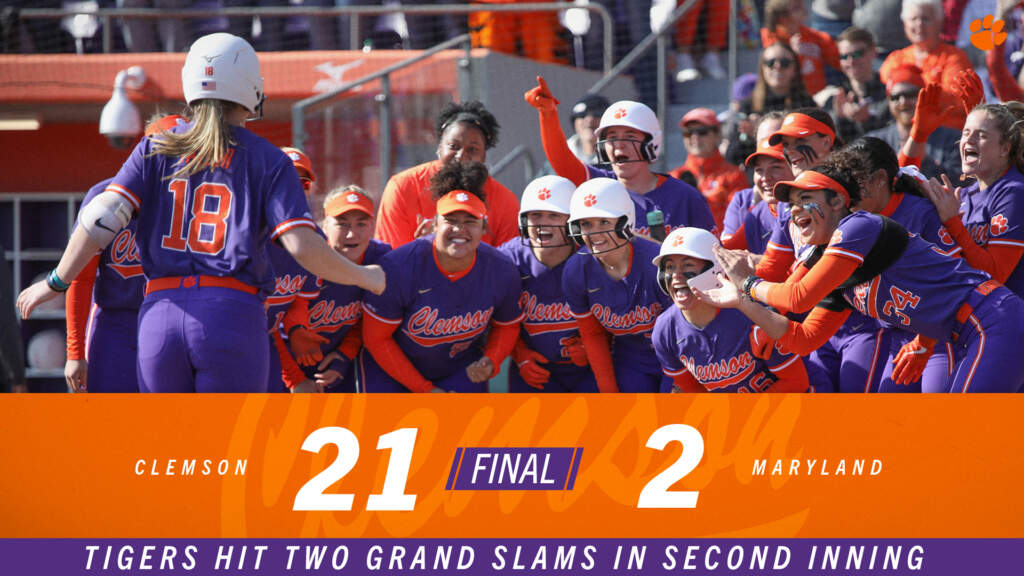