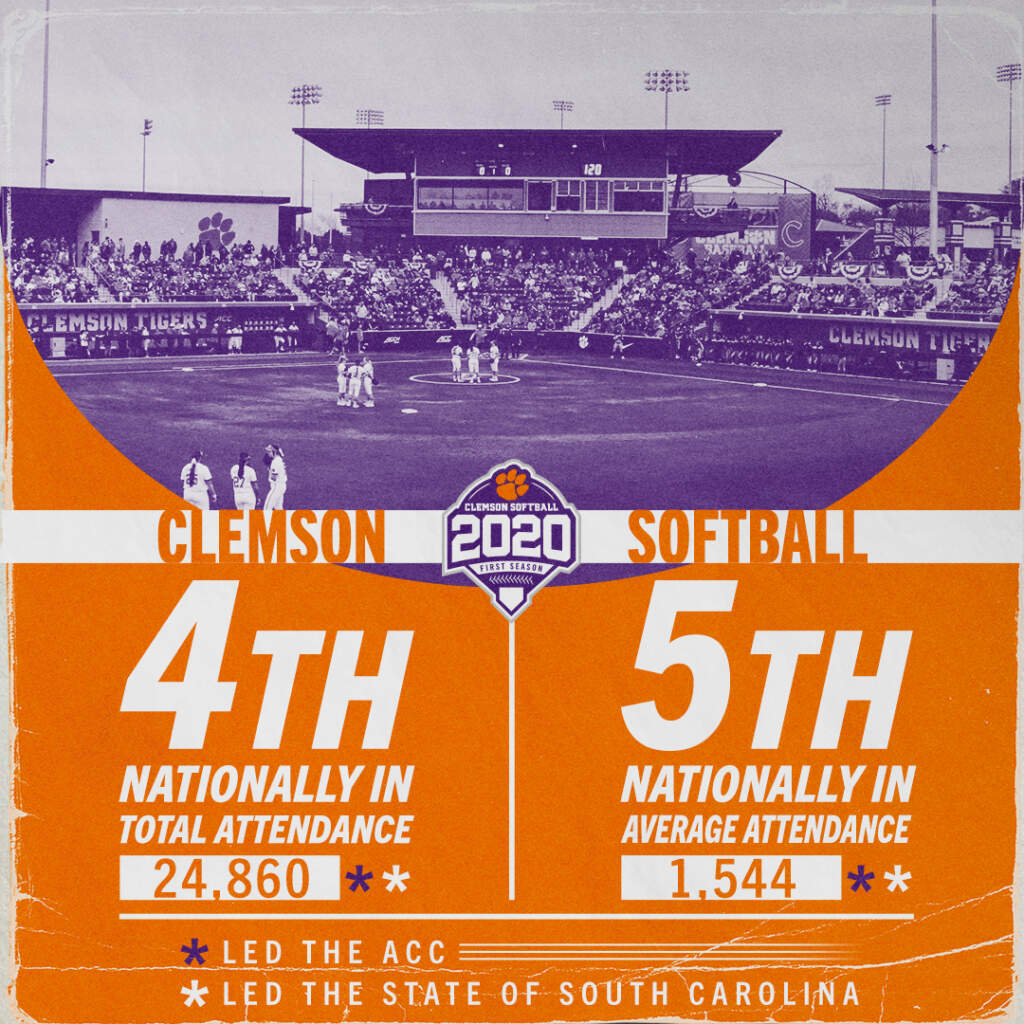 On Dec. 1, 2018, a fence was built and the site was cleared as construction began on a new stadium for the Clemson Softball program. Two months later, on Feb. 1, 2019, the coaching staff, staff members from the administration and IPTAY and staff from the construction team gathered on the grounds of the stadium for an official site visit in preparation for the first home game in February 2020.

The site visit was to officially commemorate the construction of then-Clemson Softball stadium, which will feature over 1,000 fixed chairback seats, in addition to berm seating. The facility also includes a team clubhouse with over 12,000 square feet of conditioned space that houses a team lounge, locker room, sports medicine room, equipment room and coaches’ offices. The facility also features locker rooms for the coaches, umpires and visiting team.

“Myself, our staff and players are so truly appreciative of all the generous people who have given their time and money to make this dream a reality. Words alone cannot express our sincere gratefulness,” said head coach John Rittman, who began his tenure as the first head softball coach in Clemson history in November 2017.

“Seeing our stadium construction underway brings an extreme amount of excitement. The fact that our administration has allowed us to be a part of the entire process gives us even more of a sense of gratitude, appreciation and pride.”

The complex also includes an indoor player development hitting facility that will span over 6,000 square feet. Additional accommodations of the stadium include a press box with three broadcast booths and a videoboard.

The facility was designed by Goodwyn Mills Cawood Architects while DPR Construction is serving as the contractor for the $13 million project, which had an anticipated completion date of Fall 2019. NOTE: The naming rights to the stadium had not been selected at this time.

“There is such a direct correlation in seeing the stadium being built right before our eyes, as construction takes place behind where we are currently practicing and what we are doing in the classroom, on the field and in the weight room,” noted Rittman. “Just like the builders are laying the foundation for our stadium, we are laying the foundation for our program with the seven players and coaches working daily on not only the fundamentals of playing softball, but even more importantly, our culture and core values.”

The Clemson Softball Stadium was officially renamed after Stuart McWhorter and Leigh Anne Hendrix McWhorter pledged a $2.5-million-dollar Cornerstone Partner Gift to IPTAY, Clemson Athletics and, more specifically, the softball program. On Feb. 17, 2021, “McWhorter Stadium” signage was officially installed above the stadium’s scoreboard, press box and along the backstop to honor the generous gift from the McWhorter family.