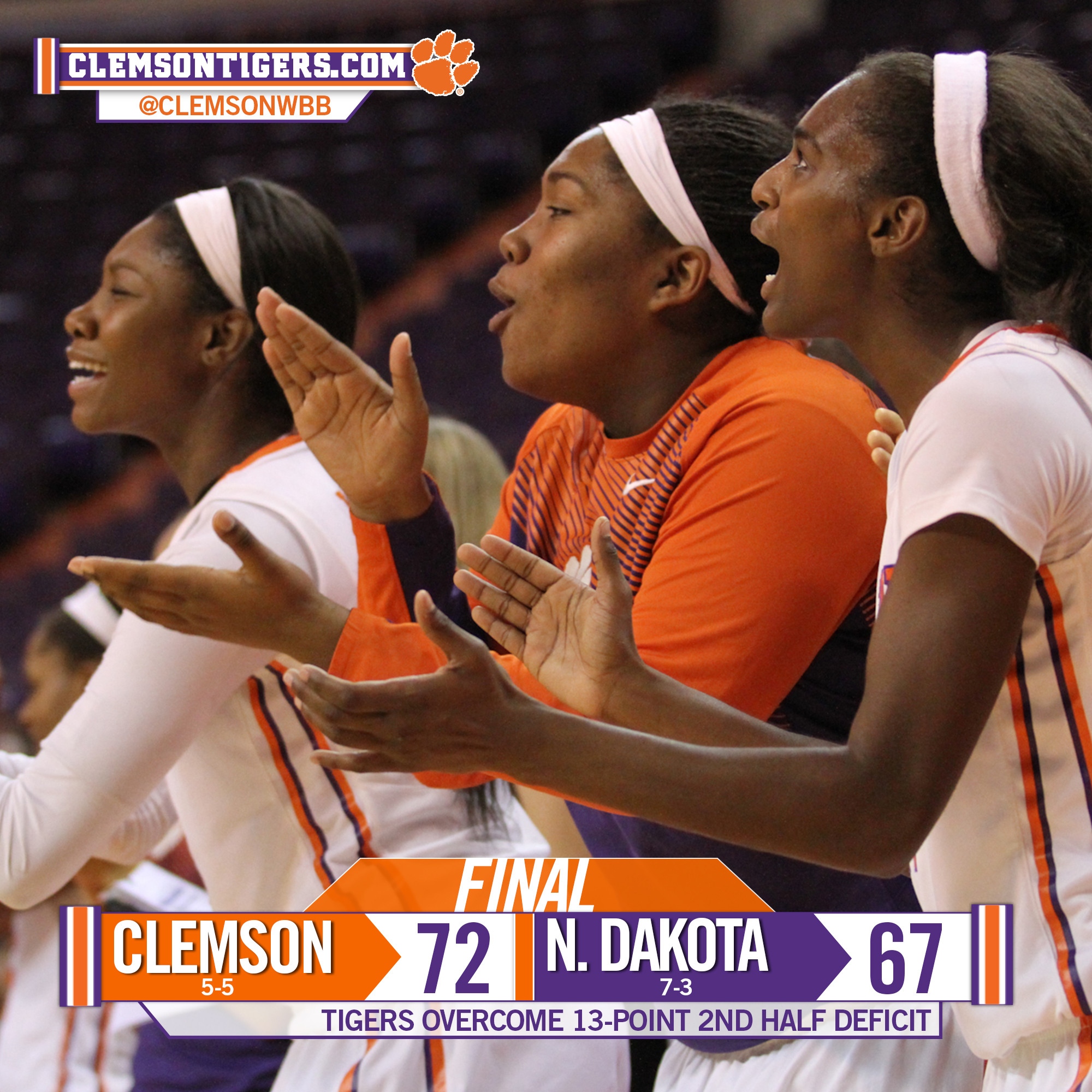 The Tigers trailed, 51-38, with 14:41 to play in the game, but received a spark from the bench, which outscored North Dakota’s bench 33-19. The difference tonight was defense, which forced 25 turnovers and was an active force all game long, turning those miscues into a season-high 29 points. Offensively, Clemson took care of the basketball and only committed 14 turnovers, the fewest since a 79-69 win over Furman on Nov. 23.

Additionally, the Tigers took a school record 31 three-point field goals, burying 11 of them with three players hitting three or more. The Tigers, who entered the game ranked third in the ACC in free throw shooting, hit all seven attempts, six of which came in the final 2:40.

The Tigers trailed by seven, 65-58, with 5:04 to play after back-to-back UND three-pointers. However, Tiffany Lewis answered with a left wing three, her fourth of the game, and Daneesha Provo hit her third three to give Clemson the lead for good with 2:01 to play.

The Tigers play the third of a six-game homestand on Dec. 19 against Longwood at 7 p.m.

Team Notes:Clemson……took a school-record 31 three-point attempts and made 11, the second-highest total in school history… dished out 14 assists as a team, most since the loss vs. Ohio State on Nov 27th… posted 12 steals, their highest steal total since the win vs. Troy on Nov 16th… shot 100% from the charity stripe, connecting on all seven attempts, six of which came in the final 2:46 of game time… bench outscored North Dakota’s bench (33-19)… committed 13 turnovers, their fewest total since the win vs. Furman on 23rd… forced North Dakota into 25 turnovers and scored 29 points off of those turnovers

-Have to give North Dakota a ton of credit. They played very, very hard. (Mia) Loyd is the daughter of Curtis Loyd, who’s a good friend of mine, and was an assistant at UVA after I left and then moved on to Minnesota, and he’s now at Indiana. She has that fight just like her dad. She’s a force to be reckoned with.

-Did a great job containing (Megan) Lauck. Scored 14 points in the first half and limited her to two in the second half.

-We made it clear that they (the players) had to take ownership of this team and that we’ve got to get better, and they responded. We told them if we control the glass and take care of the basketball, we win games. Once we were able to get pressure and rattle them,

-Can’t give (Daneesha) Provo enough credit. She’s been going through a very difficult time lately, having recently lost a family member, and the way she stepped in and became a major factor tonight and giving us a spark on both sides of the ball was tremendous. Francesca (Tagliapietra) was in there doing what she does. A lot of what she does won’t show up on the stat sheet, but what she played her role and played it well.

-For these players to dig themselves out of a hole was phenomenal. We’ve got to learn to play from behind, and this win was what we needed and a great step in the right direction. We have to be resilient, play with an attitude and an edge, and we did that tonight.

The Lady Tigers compensated for a poor rebounding performance in the first half and outrebounded North Dakota by an impressive 22-13 margin in the second half. Clemson took care of the basketball throughout the contest, only committing 13 turnovers while forcing North Dakota into 25 turnovers.

The key to the Clemson victory was a balanced offensive attack in which eight Lady Tigers scored and four (Dixon, Provo, Lewis & Davenport) hit double digits. Furthermore, Clemson scored 72 points and made 11 three pointers (season-high) in the contest. Finally, bench points were vital in the contest, as Clemson’s bench outscored North Dakota’s bench 35-19. Overall, the Lady Tigers came alive in the second half offensively, which led to a gutsy victory over a fundamentally sound, hot-shooting North Dakota squad.

Three-year letterwinner and sharpshooter Kelly Gramlich, a graduate student, gives her take on the first half.

In Senior Nikki Dixon’s first start of the season, she already has 7 points and 4 rebounds in the first half of action.