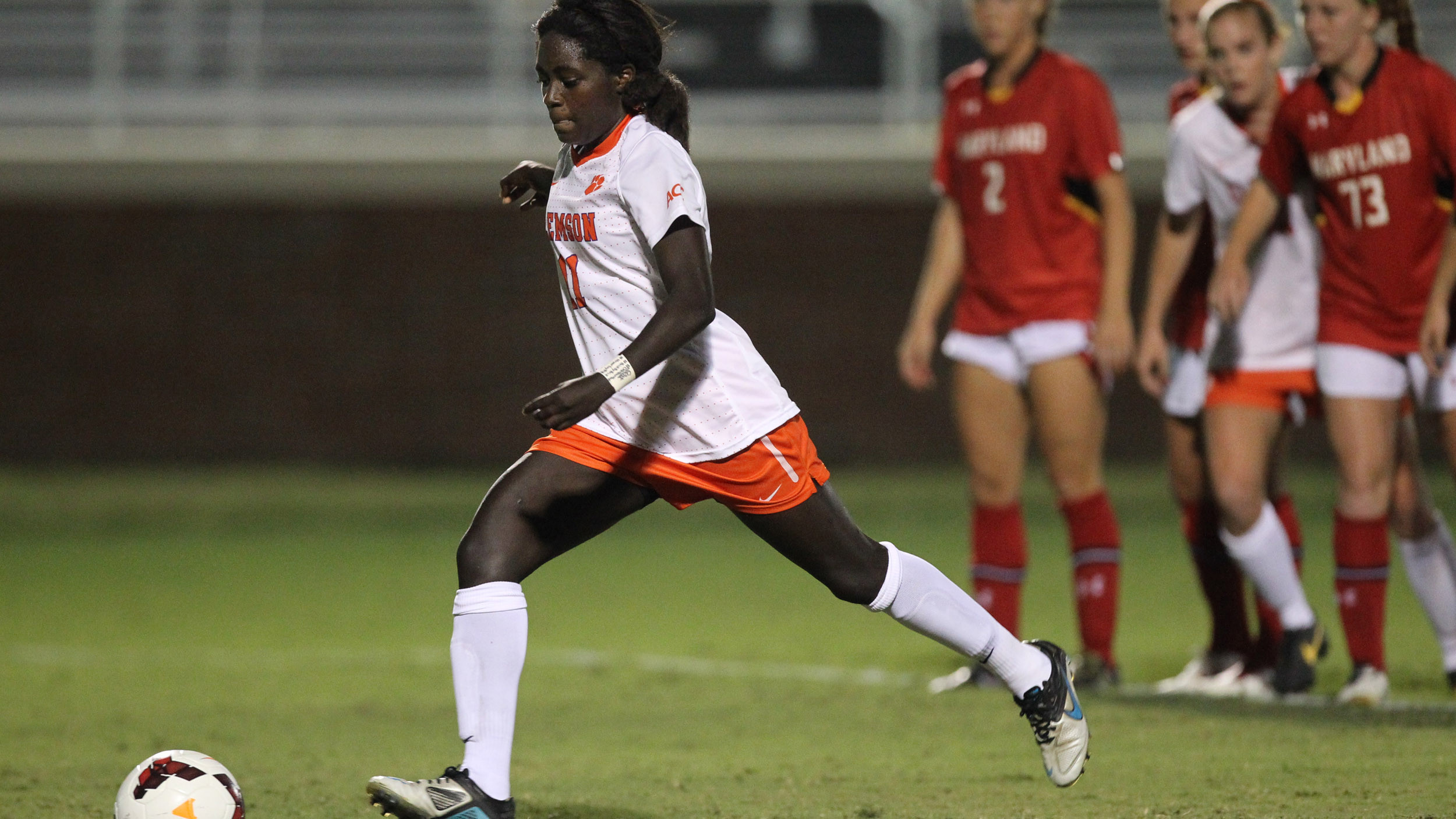 CLEMSON, SC – The Clemson women’s soccer team suffered a heartbreaking 2-1 overtime loss to 21st-ranked Maryland Thursday night at Historic Riggs Field on the opening night of ACC play.  Freshman Catrina Atanda scored the lone goal for the Tigers, who fell to 2-2-2 (0-1 ACC) on the season with the loss, while Maryland improved to 5-2 (1-0 ACC).

“We just have to be better.  We played with good effort, but we gave away two chances and we did not finish our own chances,” said Head Coach Eddie Radwanski.  “We played well and were probably the better team for the majority of the game, but that does not decide the score.

“We came out in the second half and put our stamp on the game.  We earned a good goal and you could feel the momentum shifting.  You have to give credit to Maryland, who came on the road and did not stop battling.  When you are that good up front, you always have a chance, and they took advantage of their chances tonight.”

Hayley Brock put Maryland on the board in the 35th minute when she intercepted a pass and beat a Clemson defender on a breakaway, sending a shot from the right side into the lower left corner of the net.  Brock’s goal gave the Terrapins a 1-0 lead heading into halftime.

Clemson responded just five minutes into the second half, as a Maryland hand ball in the box led to a penalty kick for the Tigers.  Atanda handled the shot and put the ball in the right side of the net past the Terrapin keeper to even the score 1-1.  It was the fourth goal of the season for Atanda, who leads the Tigers in scoring with eight points.

The game remained knotted at one through the remainder of regulation and for the first five minutes of overtime.  In the 96th minute, Brock sent a pass from the right to Cory Ryan, who tapped the ball to Ashley Spivey on the left side.  Spivey netted the game-winner for the Terrapins from 10 yards at the 95:02 mark.

The two teams were fairly even statistically throughout the game.  Maryland held a slight advantage over Clemson in shots (12-11) and corner kicks (4-3).  Freshman keeper Kailen Sheridan posted seven saves for the Tigers, while Rachelle Beanlands recorded five for the Terrapins.

“As far as the big picture, we did a lot of good things in this game, and learning lessons like this are part of the process,” said Radwanski.  “This loss is definitely a tough pill to swallow, but we have to recover and get ready for another difficult opponent in Boston College on Sunday.”

Clemson will continue its six-game homestand on Sunday when it plays host to Boston College.  The match, which will be broadcast live on ClemsonTigers.com via ESPN3, will kick off at 1:00 PM at Historic Riggs Field.  Updates will also be available on Twitter by following @clemsonwsoccer.