CLEMSON, S.C. – The Clemson Softball team tallied its fifth straight win with an 8-4 victory over ACC foe Virginia (8-7, 0-2 ACC) Saturday afternoon at Clemson Softball Stadium to clinch the program’s first-ever ACC series. The Tigers, who defeated UVA 8-7 Friday evening, improved to 13-7 overall and 2-0 in ACC play and registered twelve hits on the game, which marked the ninth time this season Clemson has registered double-digit hits.

MK Bonamy registers another RBI single up the middle. She's got three RBIs on the afternoon.

Freshman right-handed pitcher Logan Caymol improved to 6-1 in the circle after pitching 6.0 innings of work, while allowing just five hits.

Junior second baseman Cammy Pereira went 3-for-5 at the dish and scored two runs for the Tigers. Freshman Valerie Cagle, who blasted a walk-off home run to earn Clemson its first conference victory over the Cavaliers Friday night, continued to stay hot, going 2-for-3 at the plate and knocking in two runs. Graduate transfer MK Bonamy paced the Clemson offense on the afternoon, batting 2-for-4 and plating three runs.

🙌 Bailey Taylor with another clutch RBI hit, this one gives the Tigers a 4-0 lead!!

The Tigers scored four runs in the first, all of which came with two outs, and two strikes on the batter. Freshman outfielder Alia Logoleo extended her hitting streak to seven consecutive games with an RBI single in the first. Then, Bonamy registered her 20th hit of the season on a two-RBI single up the middle to give the Tigers a 3-0 lead. Third baseman Bailey Taylor tacked on another run for Clemson with her third RBI of the weekend to give the Tigers a 4-0 lead in the first frame.

🎯🎯 Alia Logoleo's single to the 5-6 hole extends her hit streak, and puts the Tigers on the board!!

Virginia climbed back into the contest in the top of the second inning, using two hits to plate two runs. The Cavaliers then tied the game, 4-4, in the third inning after hitting back-to-back home runs.

It was Bonamy who put the Tigers back in the lead in the bottom of the third, scoring freshman shortstop Hannah Goodwin, who doubled to right-center field to lead off the inning. Clemson added to its lead in the bottom half of the fourth, using a two-RBI double from Cagle and a Taylor fielder’s choice RBI to extend its lead to 8-4.

The Tigers will look to complete the sweep over Virginia on Sunday at noon at Clemson Softball Stadium. For tickets, visit ClemsonTigers.com. 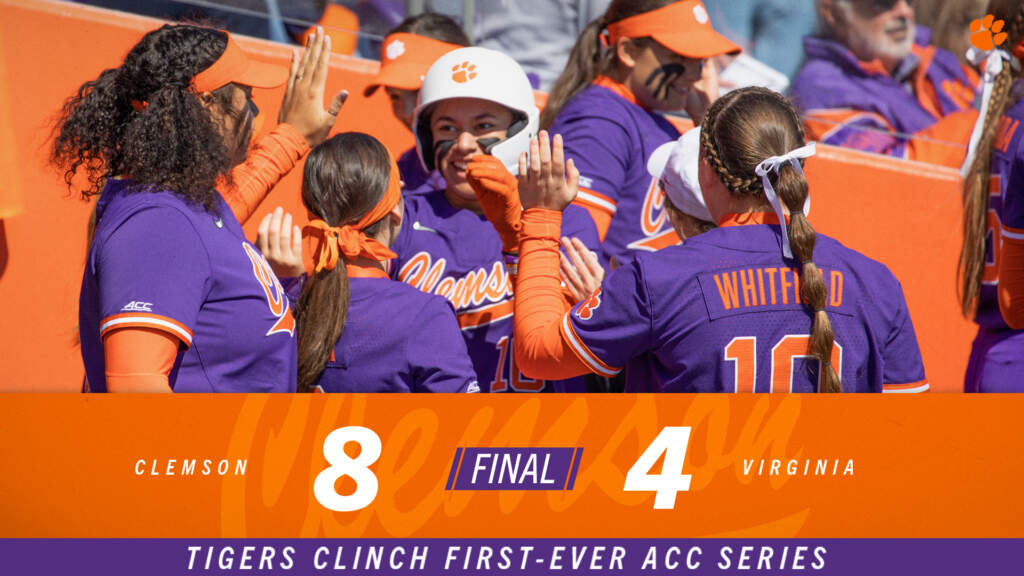