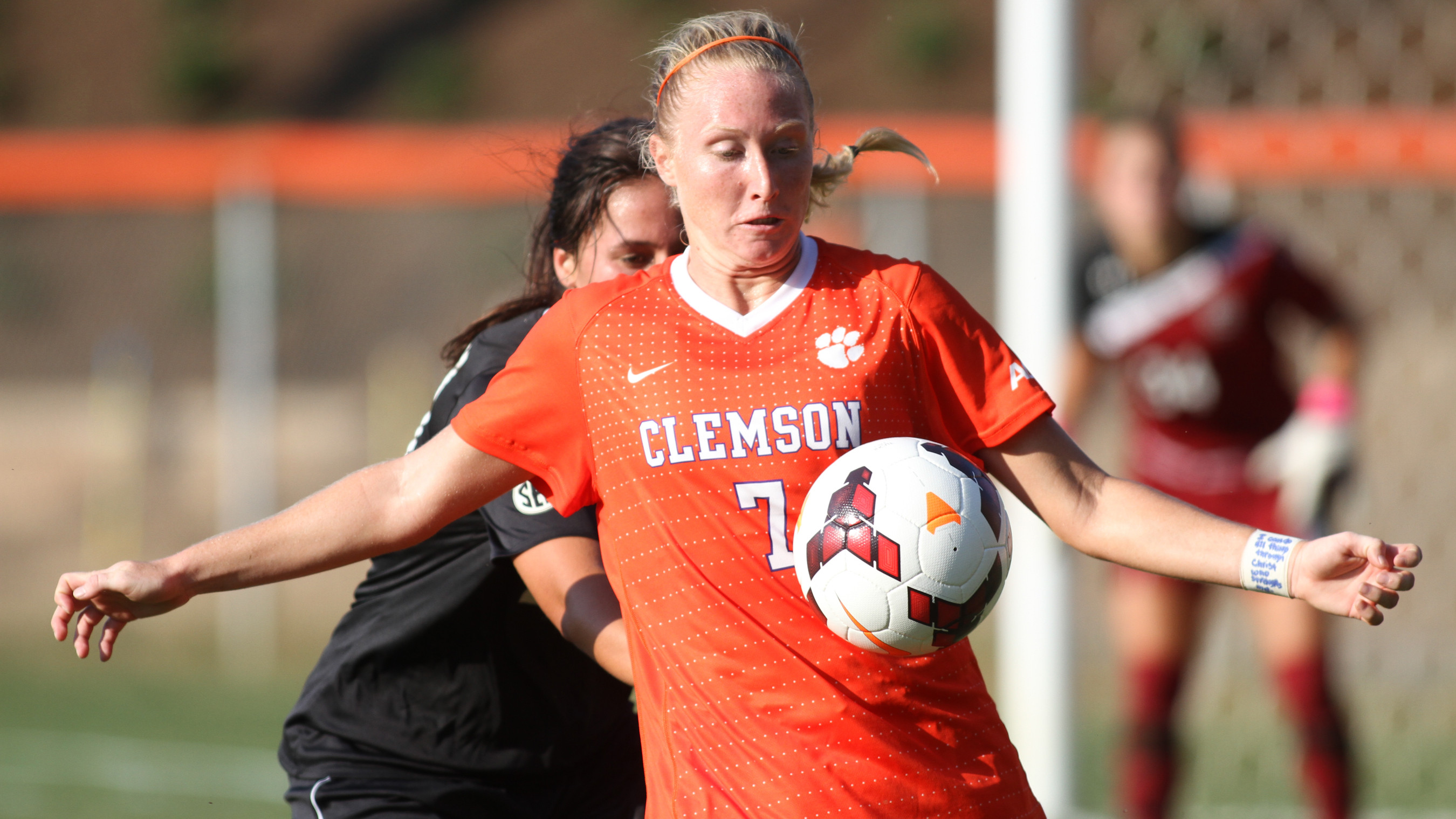 CLEMSON, SC – Despite a valiant effort by the Clemson women’s soccer team, two second half goals lifted 11th-ranked South Carolina to a 2-1 victory over the Tigers Friday night at Historic Riggs Field.  Clemson suffered its first loss, falling to 1-1-2, while the Gamecocks remained unbeaten, improving to 4-0-1.

With Clemson trailing 2-0 late in the game, redshirt senior Tabitha Padgett scored the Tigers’ lone goal in the 81st minute of play, her first of the season.  The goal was the first that South Carolina keeper Sabrina D’Angelo has allowed this season.

“This is always a challenging game,” said Head Coach Eddie Radwanski.  “South Carolina is a well-organized team and they are particularly good on free kicks.  For most of the game we didn’t allow them to threaten, but they took advantage of their opportunities in the second half, and you just can’t give teams opportunities.

“That being said, after we fell behind 2-0, I was impressed with our resiliency and character to fight back.  From that perspective, I was pleased with how we responded.  I’ll take the commitment and fight that we showed in playing down to the wire, especially from a young team.  It speaks volumes about our progress.  In the end, it’s a learning opportunity and we will move forward.”

In true rivalry fashion, the game was scrappy from the onset.  Yellow cards were issued to Taylor Leach of South Carolina and Paige Reckert of Clemson in the eighth minute of play, which set the tone for the rest of the game.  The game remained scoreless through 66 minutes of play until Daija Griffin put the Gamecocks on the board in the 67th minute on a shot that was rebounded off her teammates’ blocked shot.  Raina Johnson netted South Carolina’s second goal just over five minutes later in the 72nd minute.

Padgett put the Tigers on the board at the 80:09 mark.  Sophomore midfielder Allie Kington took a hard shot which deflected off the hands of D’Angelo.  Padgett rebounded Kington’s shot, and took a shot of her own, which was blocked by a South Carolina defender.  Freshman midfielder Abby Jones touched the blocked shot back to Padgett, who sent the ball into the right side of the net from inside the box.

Clemson applied pressure throughout the second half, taking seven shots in the period and finishing with 12 for the game, compared to the Gamecocks’ nine.  The Tigers took five corner kicks, while South Carolina took two.  Freshman Kailen Sheridan posted three saves in the contest for Clemson, while D’Angelo recorded two for the Gamecocks.

“We fought hard and battled back, which is what a Tiger does,” said Padgett following the game.  “We were a little bit unlucky, and we should have put away a few of our chances at the end of the game.  The bottom line is that we just have to finish our chances.”

The Tigers will return to action on Sunday, September 8 at 1 PM at Historic Riggs Field when they will play host to Davidson.  The game between Clemson and the Wildcats will be broadcast live on ClemsonTigers.com via TigerCast.  Updates will also be available on Twitter by following @clemsonwsoccer.