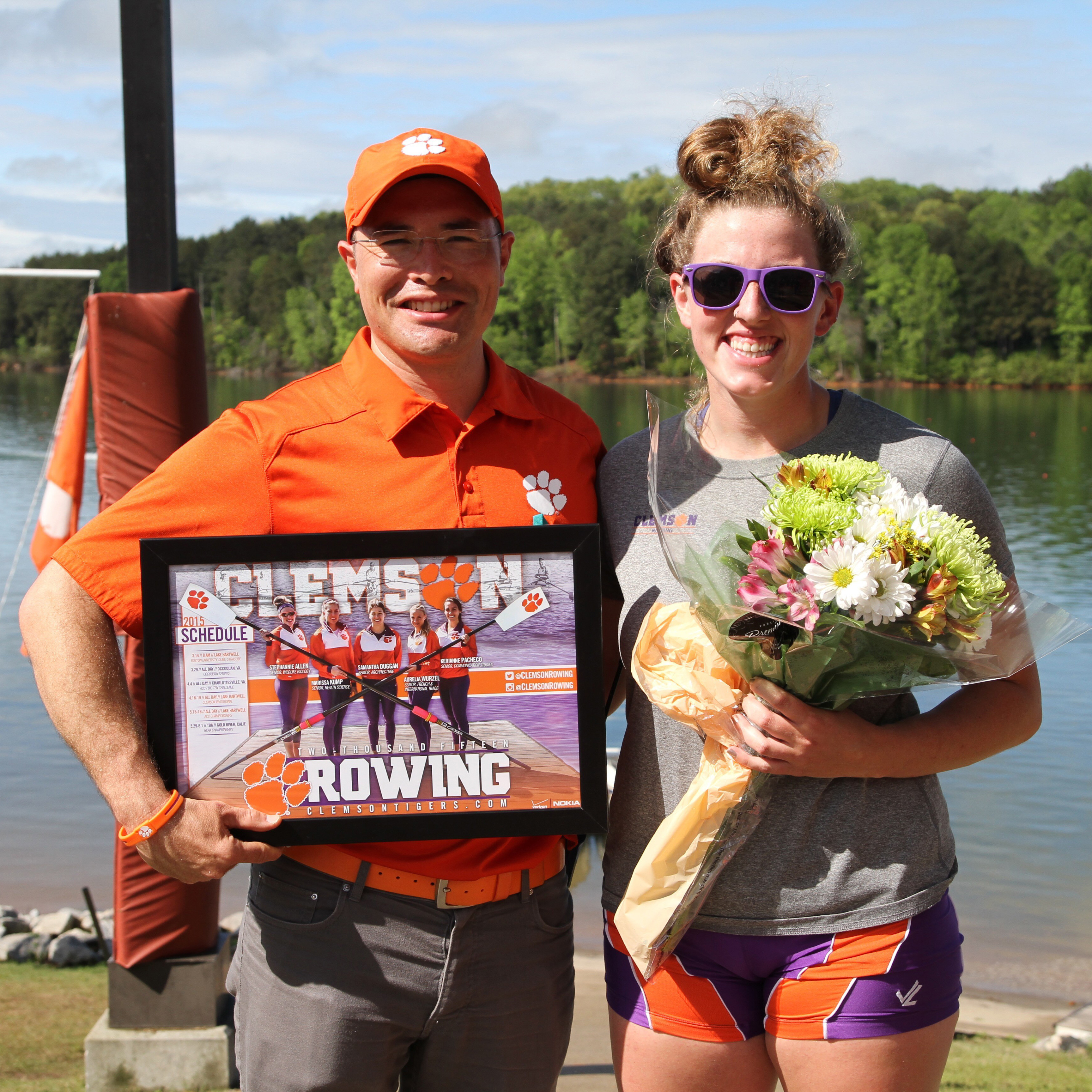 Note: The following appears in the May issue of Orange: The Experience, which is in the mail to IPTAY members.

At Clemson, all student-athletes call themselves Tigers, but few actually get to work with them. For one athlete, though, working with tigers is a passion.

Stephannie Allen has been a constant presence since day one of her freshman year on the Clemson rowing team, representing the Tigers on the water. Off the water, though, she helps conserve and protect them.

A native of Orlando, Fla., and a wildlife biology graduate at Clemson, Allen volunteers at the Central Florida Animal Reserve when she is home. The CFAR is a big cat sanctuary for tigers, lions, leopards and cougars that have been rescued from bad situations.

“I am a really big animal person,” Allen said. “I am really interested in wildlife conservation and education, and I’ve been that way since I was little.

“I love sharing animal facts. I would always watch Animal Planet, and then share what I learned with my parents. And I think that has translated into me wanting to teach people about wildlife and the ecosystem.”

A day at CFAR includes feeding the animals, cleaning their cages, giving them new water and cleaning up around the property.

“A lot of them need special medical care,” she said. “We’ll give them pills in their food, and just try to give them a better life from what they were rescued from.”

What struck Allen the most, though, was the lack of laws concerning the ownership of big cats.

“There are more laws against owning a pit bull than a tiger,” she said. “It has made me aware of the fact that people don’t know how to take care of an animal that eats pounds of meat per day. That has potentially wanted to make me go in that side of wildlife biology.”

As evidenced with her work at the CFAR, involvement is big for Allen. Another way she stays actively involved is with the Student-Athlete Advisory Committee (SAAC) at Clemson.

Though she started off as a general member, Allen worked her way to the executive board to be more of a leader within the organization.

“I recognized that SAAC is a really cool thing, and that we do cool things for our athletes, and I wanted to be a part of that,” she said.

On the water, Allen is a co-captain for the Tigers and has a long list of accomplishments. Like many other rowers, though, it was not her first sport.

“I started rowing my freshman year of high school. At the time, I was still playing softball. They came to me and said they were looking for tall, athletic girls … and that was me. They also told me it was a sport that you could be good at without any previous experience, so that’s kind of how I got into it. As soon as I realized how competitive my high school team was, that fit me and my personality.”

Because of the intensity of her high school program, Allen was originally unsure if she wanted to continue the sport in college.

“I originally had a rowing school list and a non-rowing school list when looking at colleges,” she said. “Once I realized the benefits of being an athlete in general, though, I really wanted to do it. Clemson had everything I was looking for academically, and I fell in love with it even more on my recruiting trip. I committed at the Head of the Hooch, where both myself and Clemson were racing.”

Allen has rowed in the three seat in the First Varsity 8+ all of 2015, and was in the top Clemson boat in nine of 12 races her junior year. Prior to that, she was a member of the 2V8. She was named to the All-ACC Academic Team in 2014 and to the ACC Academic Honor Roll in 2012. Over her career, she has been a member of boats that have defeated 10th-ranked Yale (2013) and 16th-ranked Louisville (2014), a performance that earned the boat ACC Crew of the Week honors. As a sophomore in 2013, her 2V8 boat rowed to a time of 6:29 against Cal, good for the third-fastest 2V8 time in school history.

The win over 10th-ranked Yale has been her favorite memory as a Clemson rower.

“It was 40 degrees outside and I was just in my uniform,” Allen said. “It was such an awesome race, and I just remember being so cold, yet so hot at the same time and tingling all over. It was worth it, and it was such a great race because the entire year the 2V8 had such a fun mentality. That race was the epitome of it.”

Ultimately, it is the relationships formed from rowing that mean the most to Allen. Whether it’s being together on the water or going out to dinner on Thursday nights, she enjoys the time spent with her teammates.

The biggest takeaway from rowing at Clemson, though, will be simply being a student-athlete.

“That is something that not a lot of people get to be, and I’m proud of that. To balance everything together has been tough, but rewarding. I get to say that I was a DI athlete, and I’m really proud of that.”