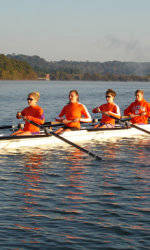 Tiger Rowing Wraps Up Day One at Aramark Central/South Sprints

Oak Ridge, TN – The Clemson rowing team completed the first day of competition at the 10th annual Aramark Central/South Region Sprints on Saturday at Melton Hill Lake. The event, hosted by the University of Tennessee, features teams from the Central and South Regions competing for the right to advance to the NCAA Rowing Championships.

Clemson’s novice 8+ boat will participate in Sunday’s A final of the event, but it wasn’t easy for the Tigers on Saturday. Clemson was fifth out of seven boats in the second heat Saturday morning with a time of 7:19.5. In the first repechage Saturday afternoon, the Tigers finished runner-up with a time of 7:22.2 to advance to the A final. The Tigers will compete with Indiana, Michigan, Michigan State, Virginia, and Wisconsin for first place in the novice 8+. Last season, Clemson finished fourth in the novice 8+.

The Tigers’ varsity 8+ boat was fifth in the second morning heat after posting a time of 7:10.2. In the first semifinal for the C & D boats, Clemson was runner-up out of five boats with an improved time of 7:01.7. That effort will put Clemson in Sunday’s C final at 10:00 AM.

The Tigers’ action gets underway Sunday at 9:40 AM with the varsity 4+ C final.