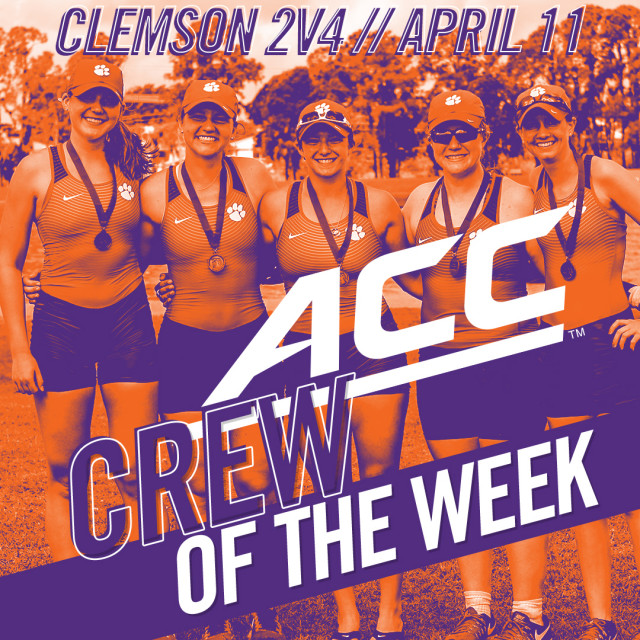 CLEMSON, S.C. ­– After winning gold at the Sunshine State Invite this past weekend, Clemson 2V4 was named the ACC Crew of the Week, as announced by the conference on Wednesday. The crew includes coxswain Megan Kauffeld, stroke Catherine Schrieber, three-seat Isabella Beckler, two-seat Emily Ash and bow Hannah Maeser.

In heats against two Clemson Invitational teams in UCF and Tulsa as well as Jacksonville, Miami, North Carolina, SMU and Stetson on day one of the event, the Tigers took first with a time of 7:27.80. In the finals on Saturday, Clemson again claimed first and the gold with a time of 7:18.90, topping the second-place Miami boat by 10 seconds.

The 2V4 and the rest of the Tigers will be back in action this weekend at the Lake Hartwell-hosted Clemson Invitational. Racing takes place in three sessions, with the first beginning on Saturday at 8:30 a.m.

From the conference release:
Clemson’s crew was chosen over the Second Varsity Eight of North Carolina and Boston College’s First Varsity Eight. The UNC 2V8 finished second in the Sunshine State Invitational in a time of 6:32.74. Boston College’s 1V8 defeated Boston University on the Charles River on Saturday in a time of 7:40.05, and Holy Cross and Connecticut on Sunday in a time of 6:48.4 on Lake Quinsigamond in Worcester, Massachusetts for the Irving Christensen Cup.