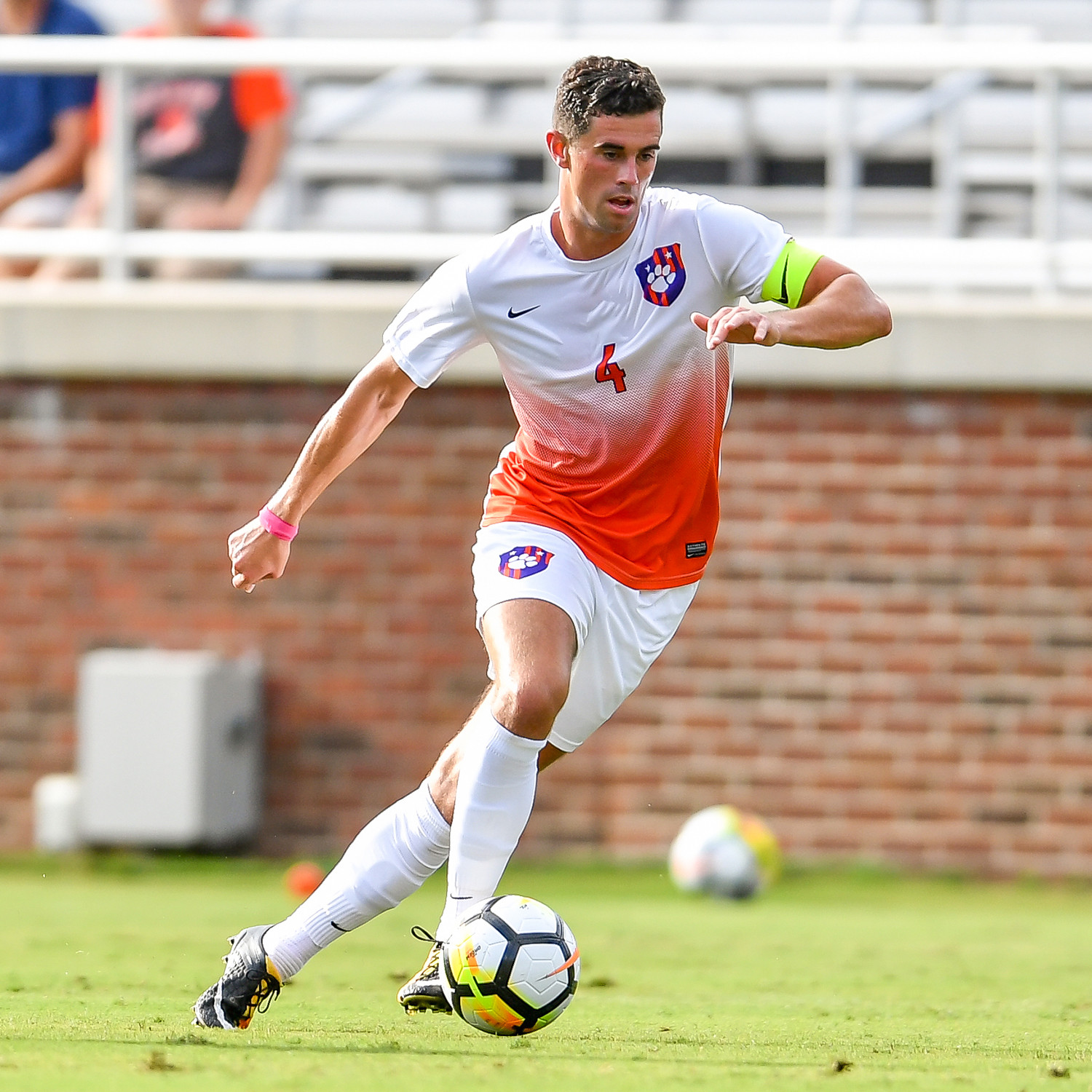 Oliver Shannon had narrowed his college search to two schools, Clemson and Connecticut, and his visits to each campus could not have been more different. The Liverpool, United Kingdom native’s trip to Clemson was filled with rain…so much so that he could not watch the team practice and did not get to see much of what Clemson was all about.

On the other hand, his visit to Connecticut was just after the men’s and women’s basketball teams had won national championships in the same weekend, so campus was “buzzing.”

“I couldn’t have really gone there at a better time,” said Shannon.

“Clemson still stood out so much more,” the senior co-captain reflected. “So I committed here, and the rest is history. Coming here was the best decision of my life. I’ve really loved it.”

The midfielder started playing soccer when he was four, and he was almost immediately scouted by Everton, a Premier League team. From the age of five to when he turned 18, he played on Everton’s youth teams, and though he describes himself as “never the most talented player,” the club extended a full-time youth contract when he was 16.

He left school and started living a “professional-type lifestyle without a professional contract” on the U18 team and was captain in his second season, the year his team won its league title.

Despite the strong second year on his youth contract, Everton told Shannon it was not going to offer him a professional contract, so he started looking into traveling to the United States to play at the college level.

He had left school at 16, but he still attended classes one day a week and maintained a strong academic background. One rainy visit to Clemson later, Shannon chose to embark on an American soccer journey.

“It’s a different approach,” he said of the decision. “Instead of going to a professional team, you come over here and get a degree and experience a different side of life and other cultures.”

In his Tiger career, Shannon has been named Second and Third-Team All-ACC as well as All-ACC Academic multiple times, and 2017 is his second year as a co-captain. He led the team in assists last year and has scored multiple game-winning goals. His favorite memories with the team include winning in penalty kicks against Maryland in the NCAA Elite Eight in 2015, and scoring twice against South Carolina the same year.

He loved sharing those moments with his Clemson family and has always appreciated the crowds at home matches, but it was not just those times when he felt the Clemson family the most.

“The Clemson family is not just a saying. I’ve had quite a difficult time since I’ve been here. In the first two weeks I was here, my mum was diagnosed with a brain tumor, so that was very difficult. I actually lost her 18 months ago.

“Having Clemson to come back to has gotten me through all that…all the guys, and even friends and professors that you have here helping you through…you can’t really explain it. For someone who’s had an experience like that, you feel the Clemson family more. Without Clemson, it would’ve been so much harder. Clemson gives me a place and a purpose to come back to.

“Since I lost her, it’s just been another motivation…having the goal of working with this team every day, and what I want to achieve after Clemson…but the biggest moment for her will be when I get my degree, hopefully in December.”

But as he earns his degree in sports communication off the field, he’ll be continuing to play for his mother on the field…working towards something he watched his other football counterparts achieve in January.

“It’s hard not to think about a national championship. We have the experience and talent. Looking at this team as someone who’s been here for three years, this is definitely the best team since I’ve been here. It’s all about putting it together, both on and off the pitch, and building on the potential.”