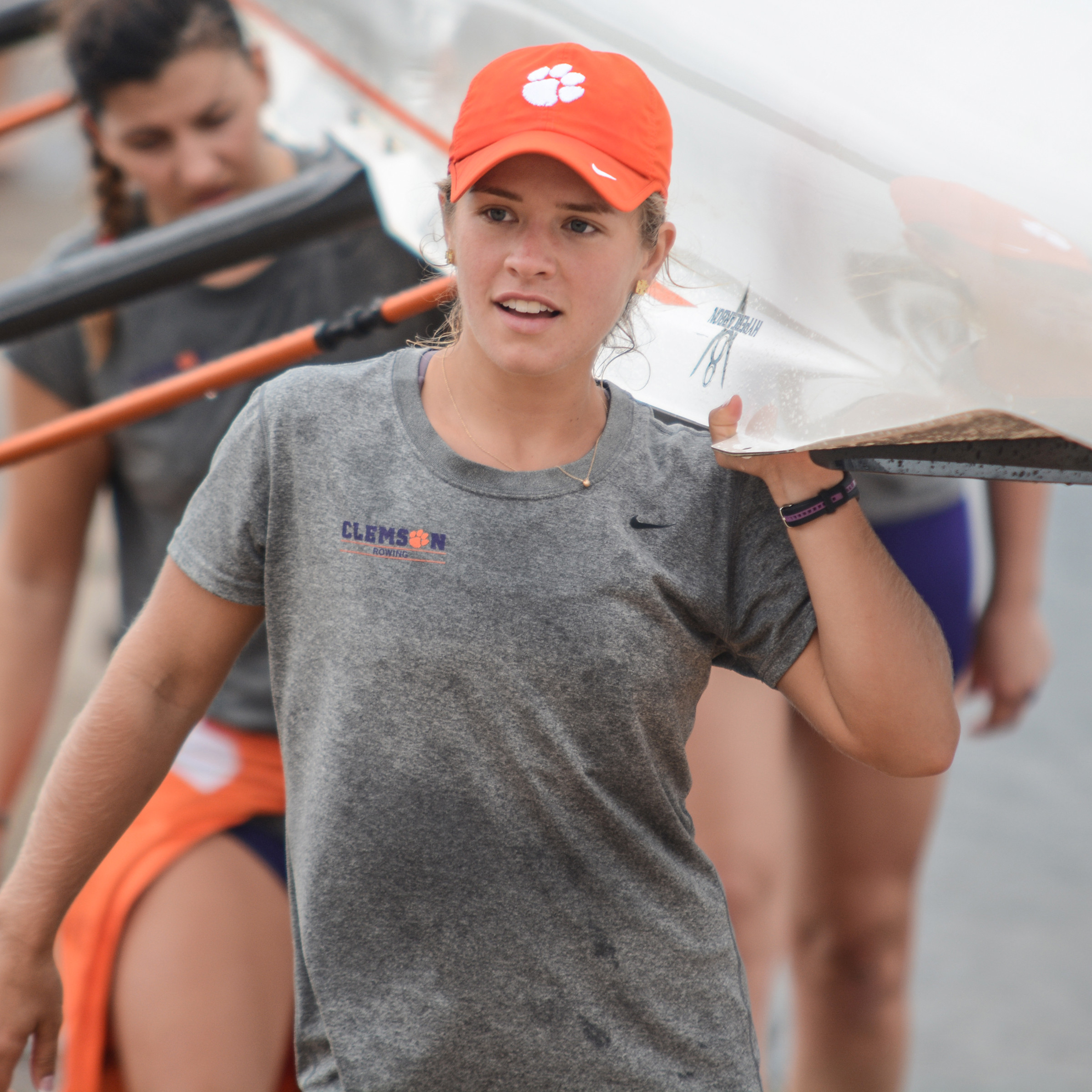 For senior rower Claire Prevost, attending Clemson was not initially on her radar as an up-and-coming, multi-sport athlete at Cardinal Gibbons High School.

“Before my oldest brother, Ryan, came to Clemson, no one in our family had gone here,” said the Cary, N.C., native. “It’s funny that now we’ve all ended up at the same place.”

Following an official visit, Prevost committed and joined the Tiger rowing program in the fall of 2013. Another brother, Connor, transferred from Navy and walked on to the Tiger football team in 2015. A third brother, Jack, is a sophomore at Clemson.

Prevost was a standout in cross country and lacrosse at Cardinal Gibbons High School, but the love of rowing had already taken root as a seventh-grader when her mother convinced her to try out a new extracurricular activity.

“When I went to the 2012 USRowing Club Championships with the Southeast Junior National Team, I was looked at by Clemson coaches,” recalled Prevost. “I loved the atmosphere on my visit and realized that this was my dream school.”

As a freshman, she developed a bond quickly with another newcomer, Ashley Robinson. During her first season, the varsity rowers were separated from the freshmen. But following the semester break, Prevost and Robinson were two of the three freshmen who earned “call-ups” to the varsity squad.

“Ashley has always been a mental and physical push for me,” explained Prevost. “We formed a bond right away. It was so helpful that the upperclassmen stepped up and welcomed us, helping us develop as athletes.”

Prevost earned the majority of her seat time with the Second Varsity 8+ as a rookie, and she helped the Third Varsity 8+ to a fourth-place finish at the ACC Championships. As a sophomore, she rowed the bow seat for the First Varsity 8+ for the entirety of the season. The 1V8 placed fourth at the 2015 ACC Championships.

She transitioned into the First Varsity 4+ as a junior, the same boat she began her senior season in recently at the Head of the Charles.

Prevost enjoyed the switch to the 1V4.

“We work well with each other and formed close-knit connections,” said Prevost, who enjoys her role in the bow of the boat because she can “see what we’re able to accomplish when we all lock in and go.”

She looks forward to the 2016-17 season and hopes the Tigers are able to produce the same results on the water that mirror the amount of work the team has put in during fall training.

“I want to see Clemson rowing reach its full potential,” she said. “We have brought positive energy this fall, and there’s more to come. I want other coaches and teams to take a step back and marvel at how far we’ve come. We have it within us.”

When her athletic career comes to a close, Prevost hopes to become involved in the medical field, either as a physician’s assistant or in pharmaceuticals.

Originally a nursing major, she switched her degree focus to psychology and completed an internship this past summer at Duke University Hospital in Durham, N.C.

“It made me realize I wanted to do a different aspect of health care,” she added. “I’m also a teaching assistant at Clemson with anatomy and psychology classes. I work hands-on with kids and teach them all the aspects of health.”

Prevost has called the team facet her favorite part of rowing for Clemson, and with the type of focus she has exhibited on and off the water, it is easy to see why.