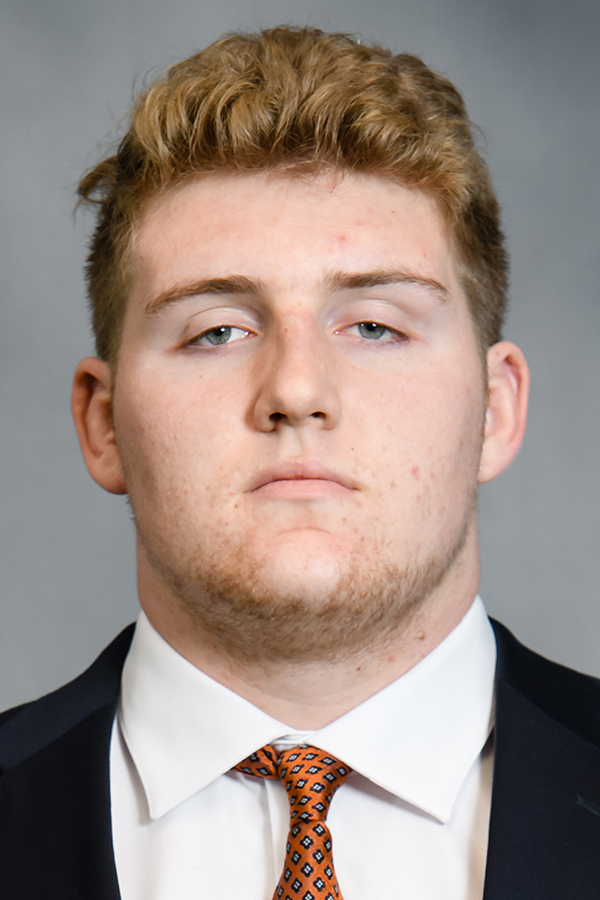 2022: Third-team All-ACC selection in his first year at center … after two years as as starter at guard, made his first start at center and played 69 snaps in a 31-point victory at Georgia Tech … played 53 snaps vs. Furman as DJ Uiagalelei set a new career high in passer rating … played 60 snaps in paving the way for 280 rushing yards and 241 passing yards vs. Louisiana Tech, collecting ACC Offensive Lineman of the Week honors … played every offensive snap at No. 21 Wake Forest, powering Clemson to 559 yards in a double-overtime victory … played 69 snaps in a sack-free performance by Clemson’s offensive line vs. No. 10 NC State … played all 64 snaps at Boston College … played 68 snaps at Florida State as Clemson did not commit a turnover for the third time in four games … played 86 snaps vs. No. 14 Syracuse as the Tigers rushed for a season-high 293 yards and leaned on the ground game to overcome an 11-point fourth-quarter deficit in the win … played all 70 offensive snaps at Notre Dame … played 74 snaps in helping power Clemson to 248 rushing yards vs. Louisville … earned his second ACC Offensive Lineman of the Week honor and collected team co-offensive player of game after playing 78 snaps vs. Miami (Fla.) to help Clemson exceed 200 yards both on the ground and through the air … played 68 snaps in Clemson’s 237-yard rushing performance vs. South Carolina.

2021: Started all 10 games in which he appeared, playing 633 offensive snaps … third-team all-conference pick by Phil Steele … played 67 snaps vs. No. 5 Georgia … played 51 snaps and shared team offensive player of the game honors vs. SC State as Clemson exceeded both 200 rushing yards and 200 passing yards … played 70 plays vs. Georgia Tech, Clemson’s second straight game allowing zero sacks … played 53 snaps at NC State … battled through 51 snaps in a Friday night win at Syracuse after missing Clemson’s game against Boston College with an injury … played 65 snaps at No. 23 Pitt … played 75 snaps and helped pave the way for Will Shipley’s 128 rushing yards in a comeback win vs. Florida State … played 73 snaps vs. No. 13 Wake Forest as Clemson’s offensive line shared team offensive players of the game honors with Kobe Pace after the Tigers produced season highs in total yards (543) and rushing yards (333) while allowing zero sacks … played 55 snaps at South Carolina in helping Clemson both exceed 250 rushing yards and allow zero sacks in a second straight game … played 74 snaps vs. Iowa State as Clemson extended its streak of consecutive 10-win seasons to 11.

Before Clemson: National top 120 player and four-star recruit by three services … ranked No. 80 overall player in the nation by 247Sports, third-best offensive guard in the nation and 11th-best overall player in Florida … Rivals.com ranked Putnam as its No. 106 overall player, No. 7 offensive guard and No. 14 player in Florida … ESPN.com listed him as No. 116 overall player, No. 5 offensive guard and No. 15 player in Florida … selected to US Army All-American game in San Antonio … played for Robert Werner at Plant High School in Tampa the last two years … played at Glenwood High School in Chatham, Ill. as a freshman and sophomore … father is with the U.S. Army and his job was reason for the transfer … helped Plant High to 11-2 season in 2018 … one of four team captains in 2018 for Plant … played both ways throughout his career … in addition to his outstanding blocking, had 63 tackles on defense in 2018 with eight tackles for loss, five of which were sacks … had 31 tackles, including 3.5 tackles for loss in 2016 at Glenwood High … outstanding wrestler who competed in state heavyweight tournament as a freshman at Glenwood in 2016 … was the Florida state champion as a heavyweight in 2018 with a 25-0 record for the season … recruited by Robbie Caldwell and Tony Elliott … signed with Clemson on Dec. 20, 2018 … enrolled at Clemson in January 2019.

Personal: Born Aug. 13, 2000 … management major … completed a microinternship with Lima One Capital in Greenville in spring 2022 … two-time ACC Honor Roll selection (2019-20) … ran the American flag down the Hill prior to the 2022 Louisville game in honor of his father, Col. Neil Putnam, who served 30 years in the United States Army, including 24 yards with the Green Berets.

today, it's about more than football. pic.twitter.com/QriV37p8Pc