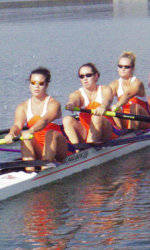 The Clemson rowing team will take part in the 2006 Stanford Invitational Crew Classic this weekend at Redwood Shores, CA. The Tigers will compete in multiple races against crews from Stanford, UCLA, and Washington State. It will be the final preparation for next weekend’s ACC Championship.

The Tigers will begin their competition on Friday, April 14 at 3:00 PM in a varsity 8+ race against host Stanford. Those two schools will also compete against each other in the second varsity 8+ at 3:30 and in the varsity 4+ at 4:00 on Friday. Clemson’s first day of competition will conclude with the novice 8+ racing against UCLA at 4:40.

The Tiger program had a successful West Coast visit last spring. Clemson achieved a first for the program when the novice 8+ defeated national power Washington, giving the Tigers their first-ever victory over the Huskies.