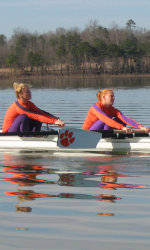 Rowing to Compete in Head of the Charles This Weekend

The Clemson rowing team will travel to Boston, MA this weekend to compete in the prestigious Head of the Charles regatta. The Tigers will be one of 46 teams vying for the Championship 8+ title on Sunday. The race is scheduled for 3:57 PM on Sunday.

Last season, the Tigers finished 30th out of 42 boats in the 8+ race. Clemson will look to elevate its performance after some strong showings this fall. The Tigers swept events at the season-opening Tail of the Tiger regatta, before competing well in the Chattanooga Head Race earlier this month.

Head Coach Susie Lueck also announced Friday that the team would not be competing in the Head of the Hooch, which was previously announced as part of the schedule earlier this season. Clemson’s next event will be the Rivanna Romp on November 13 in Charlottesville, VA.