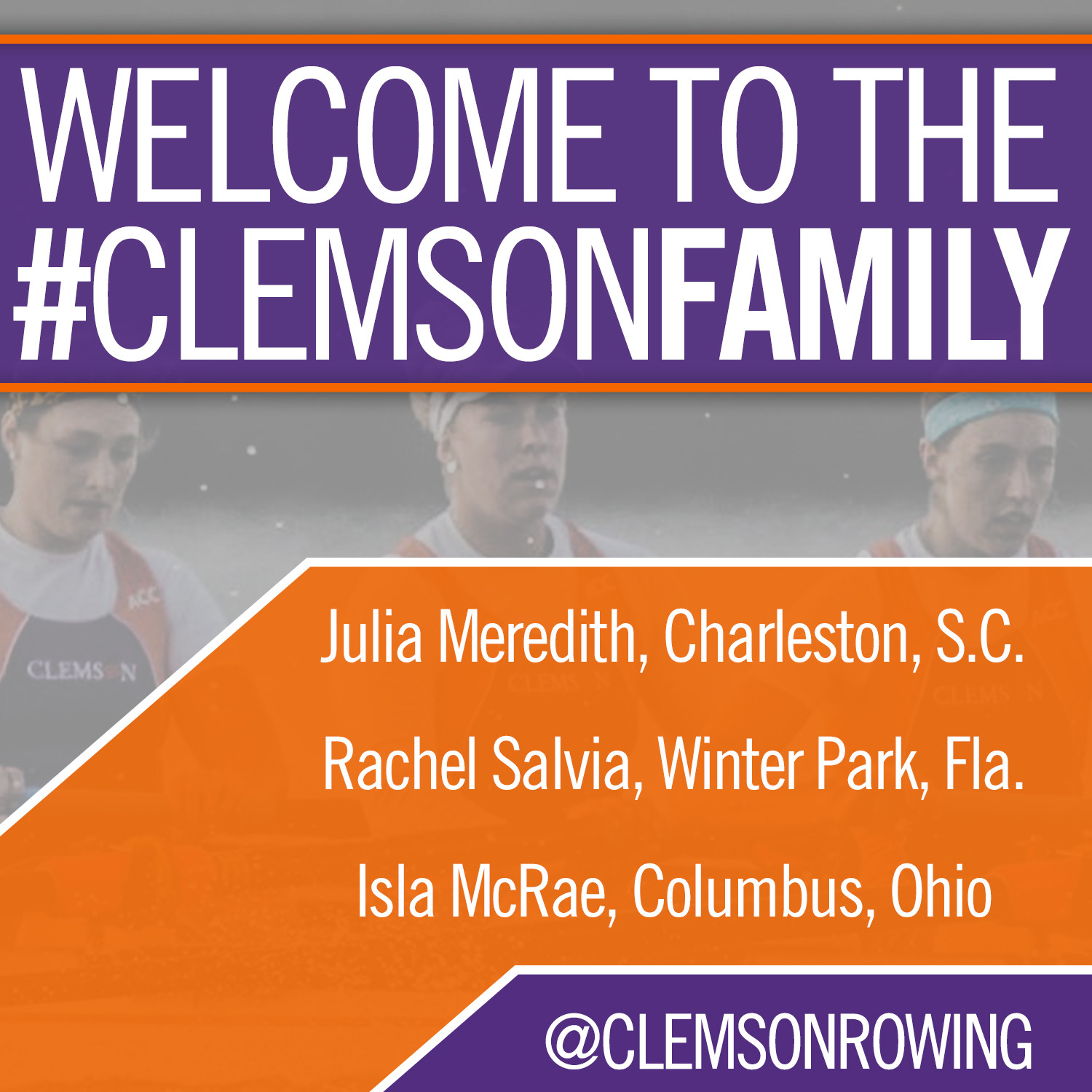 “We’re enthusiastic about this class,” said first-year head coach Frazier Wong. “We are focused on finding student-athletes who put academics first, but who are also self-motivated to row at a high level and will help Clemson compete for a national championship every year.”

Meredith, the lone South Carolina signee, trained primarily as a single as a junior with the help of Coach Rob D’Italia of the Charleston Rowing Club. This past summer, Meredith was named one of 24 athletes named to the 2015 U.S. Junior Worlds Development Team that travelled to Spain for 10 days of training. The team is selected from junior sweep, sculling and high performance camps and provides a unique development opportunity for athletes that have demonstrated the ability to compete at a high level.

“Julia is a relentless competitor and her work ethic will set a great example for the team,” said Frazier Wong. “She’s driven to achieve success in everything she attempts.”

Salvia joins the Tigers from Winter Park High School in Winter Park, Fla. It is the same high school that current coaches Stephen Frazier Wong and Caroline King attended and is the same hometown of current Tiger Stephannie Allen. Furthermore, her mother, Sonia von der Lippe, is a Clemson alum. As a junior, Salvia was coached by Michael Vertullo of Winter Park Crew and Jason Berric at the Lake Brantley Rowing Association in Longwood, Fla.

This past spring she finished first in the Women’s Junior Open Weight at the Southern Erg Sprints. She was also a part of the Varsity 8+ Scholastic State Champions boat at the FSRA State Championship. In 2013, she was one of 20 women to attend the USRowing Junior National High Performance Camp in New London, Conn. That represented the program at the 2013 USRowing Club National Championship in Camden, N.J.

“Rachel is an incredibly powerful rower and was born a die-hard Clemson fan,” said Frazier Wong about Salvia. “I know she will be just as proud to row here as we will be to have her in orange and purple.”

McRae comes to Clemson from Upper Arlington High School in Upper Arlington, Ohio. Most recently, McRae rowed for Upper Arlington Crew and coach Michael Rice, and previously at Atomic Rowing in Oak Ridge, Tenn., for coaches Allen Eubanks and Shannon Moore from 2011-14. While at Atomic Rowing in 2014, McRae finished first at the Southeast Junior District Championships in the Youth 4+, first at the Tennessee Indoor Championships in the Youth Women II and first in the Clemson Sprints in the Women’s Jr. Varsity 4+.

McRae was also one of 20 women to be a member of the U.S. Junior National Team High Performance Camp in 2014. In three races, she finished third, fourth and sixth in the Junior Women A 8+, Intermediate 8+ and Junior Women A 4+ respectively.

“She’s very down to earth and genuine,” Frazier Wong stated. “Her enthusiasm and positive energy as well as her rowing prowess will make us a faster and better team. She has many interests; she already knows she wants a career as a neurosurgeon and she shares a love of beekeeping with [Athletic Director] Dan Radakovich’s wife.”

“We think all three student-athletes will have an immediate impact on the team,” said Frazier Wong. “We expect them to be great representatives of Clemson University as well as be in the mix for the top boats from the first day of practice.”