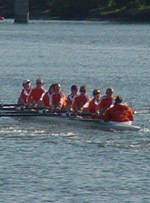 The fall schedule for Clemson’s rowing team was announced by head coach Susie Lueck on Wednesday. The slate will feature five regattas and the eighth annual Clemson Class Day. Included among the five regattas are the nationally-prominent Head of the Charles, Head of the Hooch, and Rivanna Romp.

The Tigers kick off the fall season October 1 when they play host to the Tail of the Tiger on Lake Hartwell. Last season, Clemson dominated this event by winning each of the races entered. Among the schools expected to compete will be Georgia and South Carolina.

At the Chattanooga Head Race the following weekend, the Tigers will face stiff competition from South Region rival Tennessee. Last spring, the Volunteers edged out the Tigers for second place at Regionals.

The Tigers return to the prestigious Head of the Charles for the fifth consecutive year on October 22-23 in Boston, MA. It is a challenge Lueck said the Tigers are looking forward to.

“The Head of the Charles will give us an opportunity to race against some top programs from around the country,” Lueck said. “It will be a good early-season indicator of our speed.”

In the Head of the Hooch competition, top Division I schools from the Southeast area will be competing. It will give the Tigers a chance to race multiple boats, including the first time the novice teams get a chance to compete against other schools from Division I. Last year, Clemson won both the 4+ and 8+ freshman collegiate events.

Clemson will compete in the Rivanna Romp for the first time since the fall of 2002. The event, hosted by ACC rival Virginia, features a number of competitive programs from around the country, including Ohio State.

In other rowing news, Clemson announced Becca Brinker as its new assistant coach in charge of recruiting. Brinker was initially hired as the program’s director of operations. She rowed at Ohio State four years and spent the 2004-05 season as an undergraduate coach with the Buckeye program.