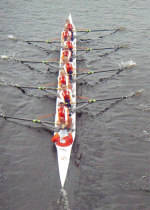 The University of Virginia rowing team claimed the seventh annual ACC Championship on Saturday at Lake Hartwell. The Cavaliers swept all four races on an overcast morning in Clemson. Virginia has won the ACC Championship all seven years it has been held.

The Cavaliers won the team title with 60 points, followed by Duke in second with 43 points. The third place team on Saturday was Miami with 34 points, followed by Clemson with 30. In fifth, Boston College scored 25 points in its first-ever conference regatta, while North Carolina was sixth with 17 points.