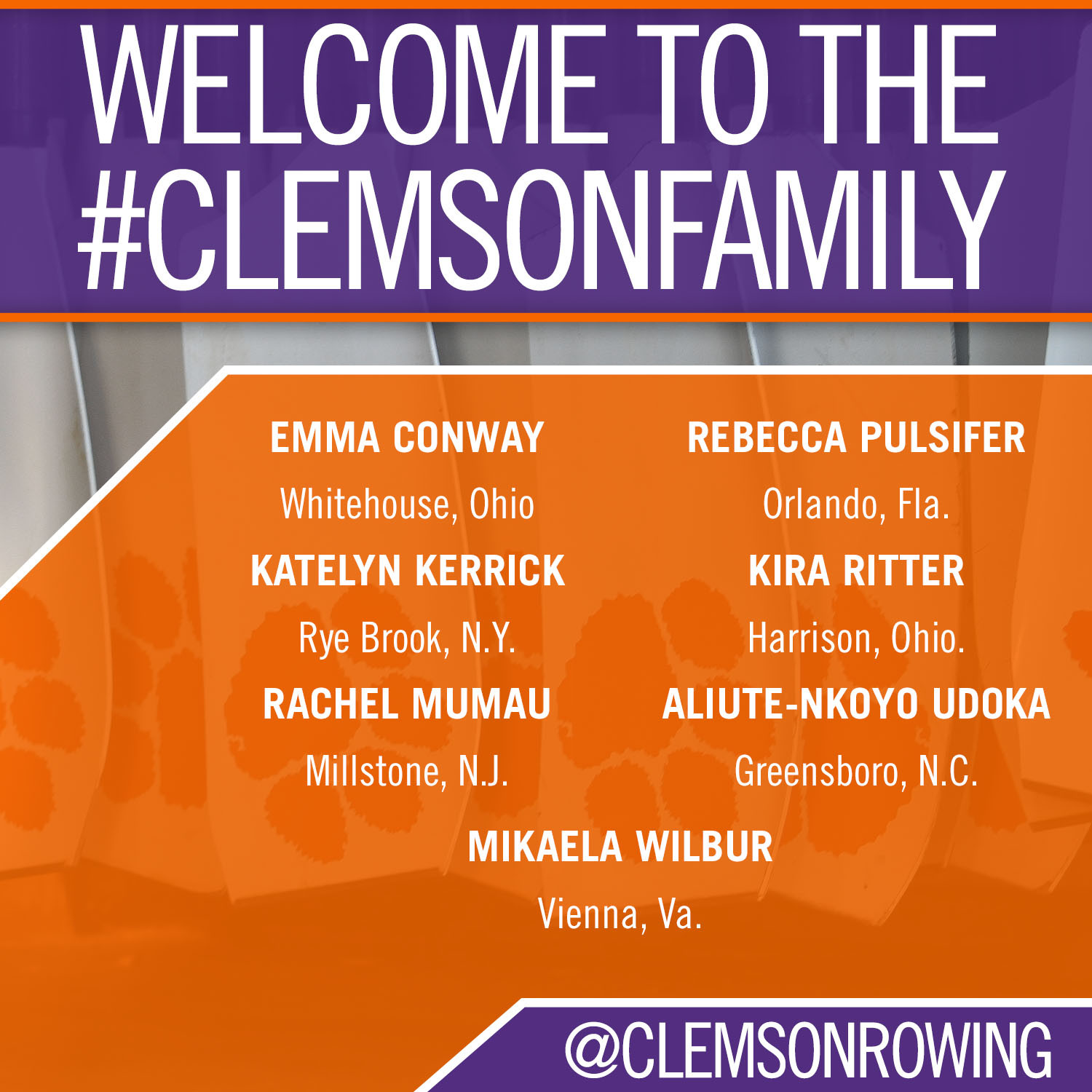 Head Coach Stephen Frazier Wong and his rowing staff have signed seven student-athletes to national letters of intent during the most recent signing period.

“This year’s class is well founded in academic integrity and championship experience,” Frazier Wong said. “Each individual was chosen for her capacity to take advantage of all that Clemson has to offer. Each of these young women will push forward and realize her full potential as a student, as a competitor, and as a whole person.”

Conway: “I chose Clemson because of the positive, exciting, and dynamic campus with top-notch sport facilities and classrooms. The strong family-like atmosphere of the rowing team was also very appealing. ”

Frazier Wong: “Emma is a great fit for our team. At first, she may seem like the quiet type, but that’s because she lets her determination and hard work speak for itself. She has such a positive attitude and has made the US Junior National High Performance Team for the last two years. We knew we wanted her to come to Clemson since her official visit.  We’re very happy she chose us and know that she will succeed here.”

•   Competed at the 2015 Youth National Championships in the 4x

Kerrick: “In addition to Clemson’s great academic programs, the coaches and rowers on the team made me feel comfortable and at home when I was on my visit. The competitive drive of the team is something I look forward to being a part of next year.”

Frazier Wong: “In addition to having tremendous boat-moving power, Katelyn embraces the team-first concept. She’s rowing with some very young teammates right now and she’s always excited to talk about how fast they’re learning and how well they’re doing. We’re excited about such a strong rower and teammate joining us here at Clemson.”

Mumau quote: “Once I had visited and met the coaches, I had a good feeling about the school overall.  I could tell that the coaches were pretty interested in me as a potential Clemson Rower and that made the decision even easier.  After meeting and getting to know some of the rowers, Clemson already felt like home.  One of the biggest reasons for choosing Clemson was because of the school spirit I saw and witnessed when I was there and I knew that I needed to be a part of it!”

Frazier Wong: “Rachel’s club rows at one of the training sites for the US National Team, so she has been able to see firsthand how elite rowers work and prepare for competition. She has used these examples to help propel her team to championships and, as a result, has three gold medals in international competition.”

Pulsifer: “I have loved Clemson all of my life. My father attended Clemson and was part of the class of 1979 and I realized how proud I would be to represent the school that I have always loved, as a student athlete. Along with the outstanding coaching staff and their vision for the future, I felt at home on the campus and with the team, which is what ultimately made me want to be a Tiger.”

Frazier Wong: “Rebecca has been a part of the Clemson Family since birth. We can’t wait for her to bring her strength, enthusiasm and passion for Clemson to our team next year. She already bleeds orange, so we know she will represent Clemson with pride when she wears the Paw on race day.”

While at stroke seat of the CJRC Varsity 8+…

Ritter: “One of the main reasons I decided to go to Clemson is the people. Everyone I met on my visit was kind and welcoming, so you couldn’t help but to feel at home. Also, the campus is beautiful and I loved the team! The entire team is friendly and caring and truly focused on improving each day. The coaching philosophies of improvement and self-growth are so evident in practices and influence the team vibe in such a positive way. Overall, the team really just wants to help one another get faster and I like that a lot.”

Frazier Wong: “Kira is a racer; she thrives in the heightened pressure of the contest and uses it to elevate her own performance. She combines this competitive spirit with a wonderful personality and key leadership skills.”

•  Intended major: Animal and Veterinary Sciences with a minor in Spanish

Udoka: “I chose Clemson based on my experience on the first full day at the university. When I stepped on campus, it had a welcoming and passionate aura. That day, the whole student body was dressed in a wave of orange that never ceased. This love for their school and family environment led to me choose Clemson.”

Frazier Wong: “Aliute possesses the drive to succeed in the classroom and on the water that we expect from a Clemson student. We recruited Aliute as much for her strong character as for her ability to move a boat. She has a high level of internal motivation and we are thrilled to be able to help her achieve her dreams here at Clemson.”

Wilbur: “Clemson was the perfect fit for me as both a student and a rower. It has a strong engineering program, great job placement after college, and the rowing team has the potential to become very fast in the coming years- something I definitely want to be a part of. My decision was also reinforced by the hundreds of Clemson alumni who would appear out of nowhere anytime I brought up my college decision and would explain why they felt Clemson was the greatest place on Earth.”

Frazier Wong: “Kaela impressed us with her intelligence, maturity and her potential as a Division I rower throughout the recruiting process. Her commitment to rowing is only eclipsed by her dedication to academics.”