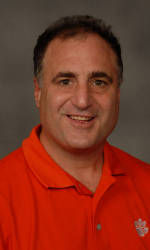 Clemson, SC – The Collegiate Rowing Coaches Association has honored Clemson’s Head Rowing Coach Richard Ruggieri as the South Region Coach of the Year. The Coach of the Year Award is intended to recognize a head coach that fits one or more of the following criteria: Outstanding success during the current season, demonstrated great team improvement from the prior season, fulfilled team’s potential and demonstrated a high level of professionalism and integrity as a coach.

In his first year with the program, Coach Ruggieri has led the Varsity 8+ crew to the school’s first ever NCAA Rowing Championships bid. In addition, they are currently ranked #12 in the nation, which ties the school record for highest ranking. The Varsity 8+ crew is coming off an excellent performance over the weekend at the South/Central Sprints, defeating previously ranked #6 Tennessee, #11 Ohio State, and #16 Minnesota. Coach Ruggieri led the Tigers to a second place finish in the South region, and a sixth place overall finish at the South/Central Sprints.

Other notable coaching accomplishments this season include the Tigers second place finish at the ACC Championships held on Lake Hartwell in April. In addition, the Varsity 8+ crew won the petite final at the San Diego Crew Classic, and the Second Varsity 8+ competed in the grand finals at the same regatta.

“I am honored to be recognized by my peers and thankful for the opportunity to coach at Clemson University,” said Coach Ruggieri. “This award would not be possible without the support of our university, athletic department, support staff, coaches and most importantly, our athletes. Without them we are capable of very little. It is a wonderful time to be a Clemson Tiger.”