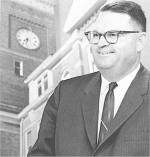 In the fall of 1978, my first year at Clemson as assistant sports information director under the legendary Bob Bradley, my first task each day was to interview a Clemson coach for the daily sports report. Two decades before the internet, I would tape an interview, usually about the upcoming football game, with a Clemson assistant coach, or Head Coach Charley Pell. Fans could call a phone number and listen to the interview.

By mid-October the Tigers were 6-0, ranked in the top 10 in the nation, and getting ready to play a very good NC State team in Raleigh. There were numerous media requests for that game, plus I was trying to finish the basketball guide. I got sidetracked on a Wednesday, and by 11:30 AM, I still hadn’t tracked down a coach for the interview.

Just before lunch, I got a call in my office. The person on the other end was using a speaker phone and sounded like the “voice of God”.

“Mr. Bourret, I just wanted to let you know that the daily sports report has not been updated.” Quickly, I realized the person on the other end was University President Dr. Robert C. Edwards.

“I will get right on that,” I responded. “Thank you very much, Mr. Bourret. I know you are busy, but a lot of people call in to listen to that report every day…including me.”

When I hung up the phone, I wondered if Father Theodore Hesburgh, the longtime president at the University of Notre Dame, my alma mater, had ever called my former boss, Roger Valdiserri, to remind him about updating Ara Parseghian’s taped phone interview.

That is one of my lasting memories of my first year at Clemson. It told me people really care about athletics at Clemson.

Four years ago, the athletic department held a 90th birthday party for Dr. Edwards at the McFadden Building, and I was able to share that story in front of the over 200 people in attendance.

Dr. Edwards had a profound, lasting impact on Clemson athletics. He was significantly involved in many facilities projects, including the expansion of Clemson Memorial Stadium to include an upper deck and profitable luxury boxes, and the construction of Littlejohn Coliseum. He championed the improvement of Olympic sports, and strongly endorsed the addition of women’s athletic programs in the mid 1970s.

Dr. Edwards was omnipresent at Clemson athletic events. He missed just one of 242 football games during his 21 years as president. His final year (fall of 1978) he led the team down the hill prior to the South Carolina game.

We always had a seat for him in the baseball press box. I can’t tell you how many times he met a team bus before it left for a road trip. And, we aren’t talking just the football team. Many times, he saw the women’s basketball team depart from the Clemson House for a road trip even if the bus left at 5:00 AM.

He made his final appearance in that role on Friday, November 28, 2008, just five days prior to his December 4 death, when he greeted Clemson Head Coach Dabo Swinney and the entire football team from a stretcher provided by the local EMS.

I know it was a moment Swinney will never forget. Dr. Edwards was on his mind in the closing moments of the 31-14 victory over South Carolina because he could visualize him watching from his bed at the Cottingham House, a hospice residence in Seneca.

Swinney and Edwards actually have a common bond. Edwards was hired as “acting President” in 1958 after President Robert F. Poole died in office. The “acting president” title was very similar to the “interim head coach” title Swinney took on October 13 before he was named Head Coach on December 1.

When Swinney met with Edwards earlier in the season, he told him he wished the Clemson teams well before a road trip because he wanted those student-athletes to know how much he appreciated their hard work, and to let them know the President of the University was very supportive of that work.

As I reflect on the phone call I received from Dr. Edwards in 1978, it also made me realize the similarities between Edwards and Fr. Hesburgh. In 1963, Edwards directed Clemson through significant change when the University enrolled its first African American student, Harvey Gantt. There had been riots at other schools in the South during these times over the same situation, but there were no problems at Clemson. According to Gantt, “President Edwards was very fair to me. He seemed to be singularly interested in making sure the change was peaceful.”

Hesburgh was a member of the Civil Rights Commission under President Kennedy during that same era, and won the Presidential Medal of Freedom in 1964.

Edwards presided over Clemson’s first graduation of female students, and Hesburgh was the president when Notre Dame became co-educational in 1972.

Both Hesburgh and Edwards are the longest tenured presidents of their respective Universities. Hesburgh served in that capacity for 35 years (1952-87) and Edwards served as Clemson President for 21 years (1958-79).

I was fortunate to attend a private Mass said by Hesburgh in his office in the library that is named in his honor, after I attended a Notre Dame football game in October (open date weekend for Clemson). He is now 91 and nearly blind, but he has the prayers of the mass memorized and still gives an insightful sermon.

After the mass he told our small group of about 30 people to stay in their positions so he could make his way to the back door and meet everyone before they left. When he was president, if the light was on late at night in his office in the Golden Dome, any student could go to his office to talk.

That is the same personal touch that Dr. Edwards showed in everything he did at Clemson. For years in retirement he came to my office on a Monday morning and pick up extra football programs for players who had been featured the previous Saturday. He then went to the locker room and put the extra programs with a hand written note in each player’s locker.

Father Hesburgh is the most important administrator to serve the University of Notre Dame in the 20th century, and Dr. Robert C. Edwards holds the same distinction for that 100-year period at Clemson.

They achieved that level of respect because they had one more common characteristic. They both felt the most important aspect of their job was the well-rounded educational experience of the undergraduate student. They both felt that was the true mission of their respective Universities. Thousands of Clemson and Notre Dame graduates continue to benefit from that wisdom today.