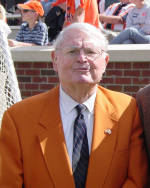 Robert Cook Edwards, 94, president of Clemson University for 21 years, died Dec. 4 at Cottingham House, a Seneca residence operated by Hospice of the Foothills.

Edwards, the eighth and longest-serving chief executive of Clemson, and his wife, Louise Odom Edwards, who died in July, served the university during a time of phenomenal growth and monumental events that shaped the future of the institution, such as the graduation of Clemson’s first female students and the enrollment of its first black students.

“R.C. Edwards was a giant in the history of Clemson University. No president will ever surpass his dedicated service to his alma mater nor his impact on all aspects of life at Clemson,” said current Clemson President James F. Barker.

“Dr. Edwards was my President and he has always been a part of my Clemson experience, from the day I first walked onto campus to today. When he shook my hand at graduation in 1970, it was one of the proudest days of my life. I still stand in awe of all that he accomplished as president. He led Clemson through the transition from a small, all-male military college to a major co-educational, integrated university. He presided over an era of enormous, much-needed change with strong, steady and visionary leadership. He will always be remembered.”

A native of Fountain Inn, S.C., Edwards entered Clemson College as a freshman at age 15 and graduated in 1933 with a Bachelor of Science degree in textile engineering.

After a successful career in the textile industry, he returned to Clemson in 1956 as the university’s first vice president for development. He became acting president in 1958 after the death of President Robert F. Poole, and was elected president by the trustees on April 9, 1959 — the second Clemson graduate to hold the position.

At his retirement, Edwards had personally awarded 28,750 diplomas, which represented more than 70 percent of all undergraduate degrees and all the doctorates awarded in Clemson’s history to-date.

He was recognized as a take-charge businessman and skilled negotiator who shared a special bond with students. His love of Clemson sports was legendary, having served a manager for the football team as a student and IPTAY president during 1954-55. He missed only one of the 242 football games Clemson played during his presidency.

According to chapter author Stephen Wainscott in Tradition: A History of the Presidency of Clemson University, “While some thought it contrary to the reserved academic image of a college president, Edwards saw nothing wrong with running onto the field with the football team or substituting for the Clemson spotter in radio broadcasts at games. Nor did he consider it a breach of presidential dignity to have orange tiger paws painted in his cheeks.”

Edwards and his first lady were a strong presence on campus and in the community. He was affectionately known as “R.C.” and she as “Moon Pie” by students and alumni, a reference to the popular Southern snack cake said to be the perfect compliment to “RC Cola.”

Excerpts from Tradition: A History of the Presidency of Clemson University, edited by Donald M. McKale and Jerome V. Reel, Jr. The chapter on Robert Cook Edwards was written by Stephen H. Wainscott.

Edwards’s leadership and the new demands of American society, politics and education in the late twentieth century transformed Clemson from a small segregated agricultural and military college for men into a coeducational, racially integrated university with a diversified curriculum.

When the Clemson board of trustees moved Edwards from acting president to president in 1959, there were 3,5000 students enrolled in compulsory military training; a faculty of 300, only one-third of who held doctoral degrees; and an old-fashioned curriculum organized into four “schools.” By 1979 and Edwards’s retirement, the student body numbered 11,000; more than two-thirds of the 1,000 faculty held terminal degrees; the four schools had mushroomed to nine colleges; participation in the military course had become optional; and students could choose what they wished to study from more than sixty majors. The Edwards years also added to the physical facilities of the campus. Monuments to the career of the man affectionately known as “R.C.” included the R.M. Cooper Library, Strode Tower, the Daniel classroom building, Redfern Student Health Center. Rhodes Engineering Center, Littlejohn Coliseum, and numerous dormitories.

Barely had he settled into the Clemson job when he found himself coordinating an effort to save the college. The United States Army Corps of Engineers had revealed plans for a dam and reservoir which, if constructed as designed, would literally turn Clemson into an island. The proposal for the construction of the Hartwell Dam and Reservoir, a multipurpose project for electric power generation, flood control, and recreation, first surfaced in 1940. The idea attracted many in the state who still yearned for liberation from the remnants of the Depression.

Between 1951 and 1955 opposition to the Hartwell project gathered momentum. A resulting study for the board by Lockwood-Greene, an engineering firm in Spartanburg, confirmed many of the dam opponents’ worst fears. The reservoir would flood 9,000 acres of Clemson property, including 1,600 acres of priceless bottom lands critical to the college’s agricultural experiment programs. Many campus building and facilities would have to be relocated; in addition, it was determined that the football stadium would be flooded.

Edwards played a key role in organizing the college’s strategy. … By the end of October 1956 the momentum had shifted to Clemson. The board, at the suggestion of Edwards and public information officer Joe Sherman, initiated a public relations offensive.

Edwards proposed that either the height of the dam be lowered or the Seneca River be diverted “around the important lands of the college.” The resolution, adopted by the board, also called for “any other modification of the plans” that would spare the bottom lands from inundation and for Clemson to be “fully reimbursed for any and all developing damages.”

The showdown occurred on 20 December when the trustees, college administration, and congressional delegation made their case to the Secretary of the Army and the chief of the Corps of Engineers. Edwards played a crucial role at the meeting, officially presenting Clemson’s policy and summarizing its primary objective of saving lands that “we feel cannot be evaluated in monetary terms.” The Corps agreed in principle to what became known as “Plan X,” the proposal that was eventually put into effect.

In the end, both parties agreed to a settlement of $1,150,000, which Clemson used to purchase the lands for the present-day Simpson Agricultural Experiment Station.

The first significant issue to confront the new president involved the integration of the previously all-white Clemson College. In July 1959 a young black man from Charleston, Harvey B. Gantt, wrote to Clemson requesting information about he school’s architecture curriculum. Within a year and a half, Gantt applied for enrollment in the college, unleashing a struggle in the courts that ended with his admission to Clemson in January 1963. But while Edwards and other Clemson officials sought through legal measures to block integration, they appeared to recognize the probability of their defeat and worked to settle the affair peacefully. This stood in contrast to the violent turmoil during the fall of 1962 that accompanied the effort of a black student, James Meredith, to enroll at the University of Mississippi.

In September 1962, as the Gantt case wound its way through the courts, the violence at the University of Mississippi, which was quelled only by federal troops and marshals, caused South Carolina officials, including Governor Ernest Hollings, to speed up their timetable for constructing a plan for peace at Clemson.

Prior to Gantt’s arrival on campus, a final security plan was carefully worked out, in which thirty SLED agents, forty state highway patrol offices, and a SLED aircraft would monitor the campus. A strict code of student discipline was established, granting the dean of students broad authority to expel from the college any students who instigated or participated in a riot. Special rules were also set forth restricting the movement and activities of the 200 press and television reporters who descended on Clemson the day before Gantt arrived.

Gantt enrolled without incident or bloodshed. Edwards put what had happened into perspective by telling the press: “It is a historic day. We will let historians record whether it is a great day.” The judgment came much sooner than Edward expected. The next day newspaper editorials across the United State commended Clemson for keeping peace. Envious praise even came from the Greenville, Mississippi Delta Democrat, hardly a tabloid of integrationist sympathy: “The Palmetto State’s leaders could have decided in favor of another Oxford; they chose progress of their state instead.”

Edwards, reflecting on the episode, insisted that Gantt himself deserved much of the credit for the peaceful transition, noting, “If Harvey Gantt had not been the great person that he was and is, the situation at Clemson would have been a lot different.” When Edwards retired in 1979, Gantt returned the compliment, telling the press. “President Edwards was very fair to me. He seemed to be singularly interested in making sure the change was peaceful.”

Visit the Clemson University Web site for photos, a timeline of Edwards’ career and highlights of his presidency:http://www.clemson.edu/newsroom/RCEdwards/index.html

You may also share memories of Dr. Edwards and your thoughts about his legacy and impact on Clemson University in an online condolences book on the above Web site.