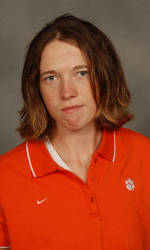 Stefanie Kozuszek is a graduate student on the Clemson rowing team. She transferred to Clemson from Murray State, where the rowing program was cut after last season. Recently, Kozuszek was named to the All-Region team by the CRCA for her outstanding accomplishments with the Varsity 8+ this season. Recently, clemsontigers.com caught up with Stefanie to get to know a little more about her before she travels to Camden, NJ to compete in the NCAA Rowing Championships next weekend.

When did you begin rowing? How did you become interested in the sport?

I began rowing in Fall 06. I was recruited on campus, went to the informational meeting, heard the words travel and potential scholarship, then decided to give it a shot.

Why did you choose to come to Clemson?

I was looking for a fast program that was on the rise. Not only did I get that, but the support of the college and community is unbelievable.

What is your favorite Clemson tradition?

I don’t think it’s considered a tradition but I love the amount of school spirit here. Everyone is always wearing their orange and purple and you can definitely tell you are in tiger territory when you drive through the town.

What is your favorite part of being a member of the Clemson rowing team?

Well as cool as the blisters and calluses are, I’d have to say my favorite part would be my teammates. They are pretty much amazing people to be around and helped make my transition here easier.

What is the most memorable moment of your rowing career?

Beating Virginia was pretty cool, mainly because if anyone would have told me that a year or two ago I would have never thought it was possible.

What has been the best part of this season?

Just getting to know everyone and becoming a part of this team. I also loved our schedule we had some tough races and got to travel to some pretty cool places.

What are you most looking forward to about the NCAA Championships?

Competing against the top teams in the nation.

What are some of your hobbies?

I love to do anything outdoors. Hiking, camping, fishing, ultimate frisbee, eating, and cooking.

What is your favorite tv show?

I don’t really watch tv but I’d have to pick family guy.

What has been your greatest accomplishment as a student-athlete?

I think just surviving school and rowing is a big accomplishment. You definitely have to learn how to balance your time wisely.

What was your favorite class at Clemson?

I would have to say either ruminant nutrition or my biochemistry class. I had to work hard but learned so much from them and when something would finally click it was the best feeling.

What is your best non-athletic talent?

I really like to bake and am somewhat a pancake connoisseur.

Something most people don’t know about me is……

I’ve been bit by a brown recluse.

What is one thing you would like for people to know about the sport of rowing?

No, it’s not like in a canoe or kayak. And rowers do not necessarily have strong arms, I am a prime example of it.

What are your plans for life after graduation?

I want to continue rowing but after that who knows, probably work with animals or in a state park somewhere. Life has a way to work itself out.