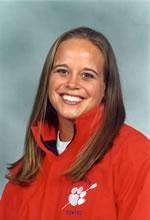 Learn a little bit more about Clemson rowing by reading this Q&A with Mary Nell “Flex” Green. The junior psychology major has helped the Tigers to a trong start as part of the Varsity 8+ and Varsity 4+. Read what she had to say below

What was the best part of your V8+ race? We were pleased that we reached our goals for this race and raced to our full potential at this point in the season. The middle of the race was very strong for us and that was were we gained our lead. I was happy with the way that we remained composed with such strong competition on the 1st half of the race.

V4+ race? This race was also a solid race through out the entire 2000 meters. The best part was the obvious commitment of all of my boat mates to the entire race. It was a very strong from start to finish.

What has contributed to the success of the team so far this year? I think the positive attitudes, teamwork and desire to make changes to become technically sound and physically stronger have really contributed to the success of the team this year. We also are showing good unity among the team and in boats. There are several of us on the team that have been able to become more mature rowers together and have started thinking, preparing and prioritizing the same way. This helps when you are in a boat together because you know you can count on one another and that you have the same goals in mind.

Why did you choose Clemson? I have always wanted to go to Clemson University since I was growing up. I also found the school spirit and the support of the Alumni to be extremely uplifting and supportive. The ONE CLEMSON college and community atmosphere is hard to escape and makes you want to be a part of it! Also, the weather is hard to beat in South Carolina!

Why did you choose to row at Clemson? I was always an athlete growing up and in high school. I didn’t want to pass up the opportunity to be a Division I varsity athlete and I was excited to learn a new sport. I wanted a new challenge and wanted to continue being an athlete.

Why do you push yourself so hard everyday and put in so many hours? I think it takes a certain type of personality and personality traits to be successful as a collegiate athlete. Being team oriented has a lot to do with it because most of the time you are doing what you are doing for the team not just for yourself. There is a sense of commitment with teammates to accomplish things together. Plus, the end result for working hard for something is much more rewarding than working for something that is less difficult and doing it by alone.

How much of your success comes from mental toughness and how much comes from physical preparedness? You can be physically prepared for something and still fail at it if you are not mentally tough…and vice versa. I think they equally go hand in hand. We have been able to focus a lot more on mental toughness this year and it has really had a positive influence on our physical performances.

What were your feelings after the races against North Carolina? We were excited with the results and pleased with the entire team’s hard work. The weekend was a good confidence builder to start the spring season off with a clean sweep.