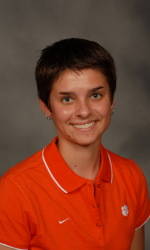 Q & A with Elyse Roenick

Elyse Roenick is a senior on the Clemson rowing team. She has been a coxswain for the past four years, and will cox the Varsity 8+ crew at the NCAA Rowing Championships next weekend. Clemsontigers.com recently caught up with Elyse to get to know her a little better.

When did you begin rowing? How did you become interested in the sport?

I began coxing my frist year at Clemson. I was recruited by the novice coach at the time, Kelly Lynch, who sought me out as a potential walk-on addition to the team.

Why did you choose to come to Clemson?

Initially I chose to come to Clemson for the Genetics program, which I had been accepted into, and for it’s location.

What is your favorite Clemson tradition?

What is your favorite part of being a member of the Clemson rowing team?

The people. I couldn’t ask for better teammates.

What is the most memorable moment of your rowing career?

Crossing the 1000 meter mark in our semi-final heat at the 2008 South Central Regional Championships and knowing we were going to make it to the Grand Final.

What has been the best part of this season?

Reaching our goal of an NCAA bid with the help and support of our teammates.

What are you most looking forward to about the NCAA Championships?

Representing our team and our university at the highest level.

What are some of your hobbies?

I like to play most all sports, read, write and hang out with my friends.

What is your favorite tv show?

Friends (I own every season).

Who do you admire most on the team and why?

Suzanne Van Fleet. Suzanne has been an amazing teammate, role model, and competitor throughout the past four years. She has put everything she has into this team and is an unbelievably talented rower.

What has been your greatest accomplishment as a student athlete?

Going from a complete novice to the sport to the coxswain of the first boat in the history of Clemson Rowing to make it to NCAA’s.

Who has been the most influential person in your life?

My parents, sisters, and four best friends have been there for me, supported me, and made me into the person I am today.

What was your favorite class at Clemson?

What is your best non-athletic talent?

Something most people don’t know about me is……

I want to write a novel.

What is one thing you would like for people to know about the sport of rowing?

Since I’m a coxswain I’ll have to say that I would want people to understand what all goes into that role. There is more to my position than just saying “stroke” or “row”.

What are your plans for life after graduation?

I will be attending the University of Florida Levin School of Law in the Fall of 2008. I plan to get my juris doctorate and practice contract law.